"Luz... She does obsess me. She did it even before I knew her story. I confess that I ignore more than I know, and I doubt most of what is said of her or all of the damn things that are around her."

Once I put these lines in another one's mouth. As on many earlier occasions, I now think that I was writing about myself.

"Is not only that this girl was enigmatically beautiful. There was something about her loneliness, her anguish, in everything that seemed to haunt and torture her." "(...) I looked her just curious, to not feel alone. Soon I realized that Luz was unlike anything I could have imagined about her."

Gray-Haired caresses her with his brushes and that turns on the envy of the American. I need to merge in her troubles, talk with her, silently watch her fears and doubts. Only seven... nineteen, nineteen years old and all the weight of the world is on her shoulders. She's strong... but not so strong. She's fragile... but not so fragile. She doubts, yet still wants to seem harmless. Unknowns, definition. She needs to know who she really is. She looks for her identity and I am in the midst of her whirlwind, trying to draw in lines of words, sometimes nonsensical, sometimes with too much sense.

"Everything in her was fascinating to me, terrible and as irrepressible attractive as vertigo is before the abyss."

Luz is the most delicate and strong creature I've ever known. Her eyes preside my nights and sometimes I steal her name to sleep. Stuck in a presence that absorbs me, that limits and releases me. I know she needs me, and I need her. She burns through me somehow, however she hasn't yet born. I imagine her with the same intensity with which he carves her skin. Her presence here and now is a desire of fate. White-Haired told me that maybe she was always waiting... for me. Thinking that Luz has waited all this time for me makes my heart beat fast. To think that we've been unwittingly predestined, led to a meeting by a more powerful hand, that wants something specific from our union. Without I'm giving to her she's incomplete. But I, like the American, also envy Gray-Haired... because he can touch her. I'm just the invisible spectrum that take notes, who hurts crying tears of blood, suffering with the uncertainty of fate, who lives her and dreams her to complete her. But always away, always absent. It's not allowed to touch... nor love ... 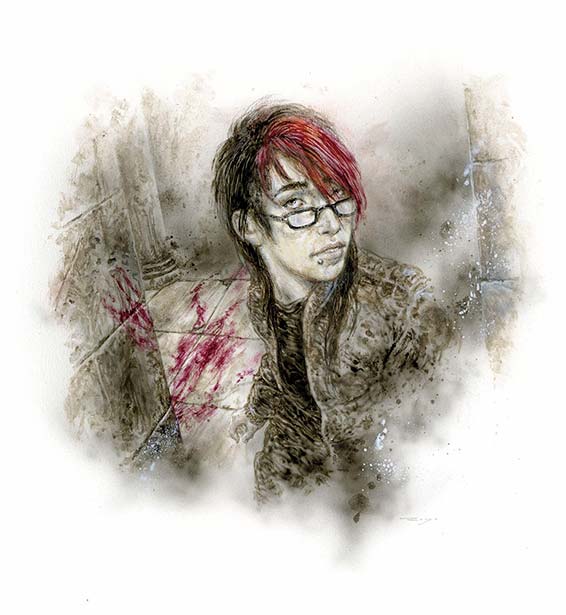 I think the American is jealous. He has been able to make tea for Luz, but I don't think he's been able to caress her skin like me. I have been able to slip by her groin gently with the delicate hairs of a brush, I could entertain myself in the corner of her lips, I could enjoy the shape of her ear ...

I've seen it in his eyes... American has seen the veins of Luz multiply wielding her sword, but he hasn't been able to spend hours sliding these hairs over each of her fingers.

He tells how was entranced watching her during hours while diving on piles of books, but he couldn't walk through each fold of her panties.