Hyper-realism? What bullshit is that? I have no Polaroid complex.

What my retina sees is to stay in place, nothing bothers me about it. For me the daily routine may be in the daily plan. I prefer the worlds that come at night.

What great people who saw with their brushes Rome and its civilization time and time after. What great people who saw Cleopatra without having met her, those who have seen the Greek gods, who left in the canvas the soul of a beggar, who reflected in a look a thousand emotions, who painted a king, but was not king but his misery, who saw that saints and virgins were not saints or virgins, who inside a geometric shape or a stain stored an emotion, a thought or a concept.

Let the Hyper-realism to whom looks for in a canvas what already gives us the retina.

Back from New York, hard times. I've wandered like a rat in the subway stations. People crowded, trading, drooling, and with the eyes leaning out to fear ... Bad times? Well, here they don't seem good times either.

I have seen followers of Nergal (was Baal who spoke in this place a few lines below, not Nergal like it was said, bffff ... always mistaken you, don't take anything too serious).

I have also seen, and I will tell you briefly this event:

The echoes came from inside the cathedral, reverberating echoes within its walls and pointed arches. The mass of refugees crowded into the main nave fled in terror as if Luz's look was burning them. They scattered along the aisles leaving a line of sight to the altar. Then she saw him.

The state of the streets in this city... from the beginning of the thirties of this third millennium the decline is accelerating...

I have crossing memories of a small town in Teruel, and this old gun... Have I been these days in New York or in Teruel?. I remember my father showing it to me when I was a child. An old junk full of scratches from the Spanish Civil War, back from 1921, and only eight bullets in the clip. Enough to bleed and fill of lead these paintings of the distressing New York, I don't know if it will still work, but one day I'll discharge it over these walls of gray windows.

Why are people from Teruel wearing white coats? Why they speak with such arrogance and get into my life? Always asking me questions... why ask so much? They do not understand anything about 2038.

Last night the full moon... Two dead moons, one on each pupil of her eyes.

Madrid undoes for me during a scarlet sunset between the coming storm clouds. In the desolate terrace of this attic I see languish the afternoon while I smoke my second cigarette. It is a repeated ritual that becomes the only space to deal with my frequent shadows. I still find this city seductive and hostile, as a beautiful woman, full of nooks and corners. "Gray-Haired" has been missing for days. His last visit to the psychiatric seems that will be long. "Stains" should go around, I hear tinkering but I´ve known nothing about him in hours. I'm alone and my head, especially thick today, battles with my own emotions and fears. 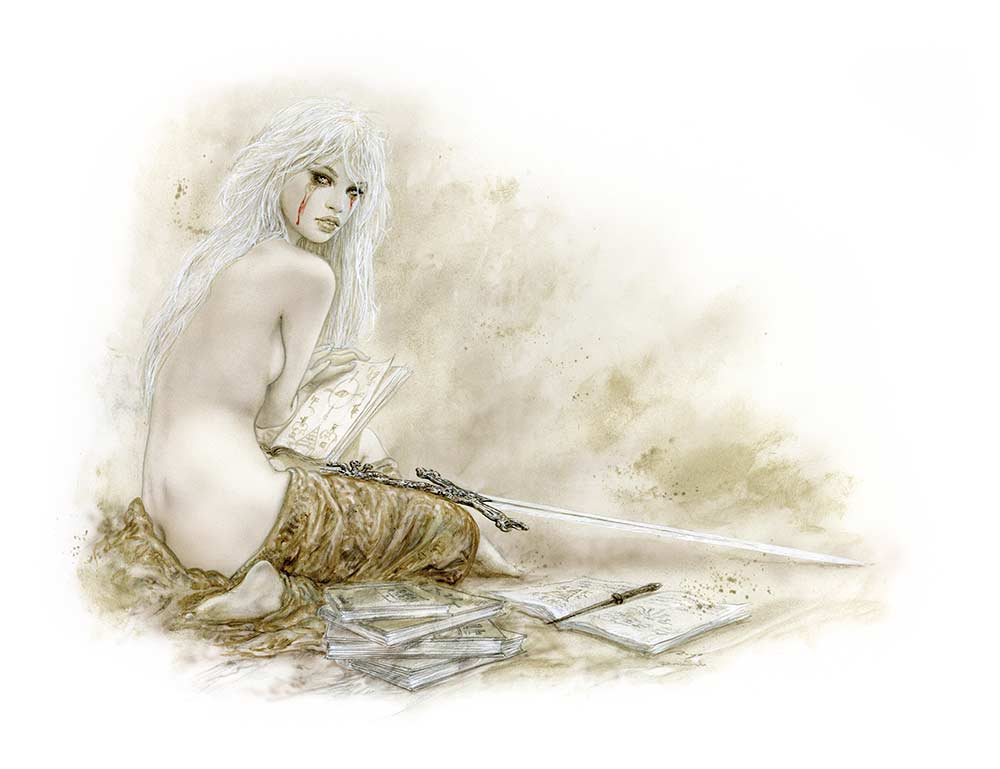 My work has barely given results, so I take out to walk the dogs of war that bite my insides. I stopped taking the medication, I was stunned, but that has given me back to the gray state that I often pretend to escape from. My soul of incomplete verses has decided to build a new barricade. Today I admit my fluctuating moods as the very essence of my creative nature. Then the dizziness and chasms display, my own personal battle. "Gray-Haired" often speaks of "our mission". I never understood his bitter efforts to take our word for something like apostles of an apocalyptic prophecy. I'd rather see her more mundane, but for me, equally intense. The abyss is to think of those thousands of people all over the world, beyond oceans, borders and languages where this story should reach. To think about their lives and their everyday invaded by the phrases and lines that I stich and chain in this attic of Madrid. To think about their wait, their expectations, their dreams or nightmares that will appear after reading what I write. Neither know nor will know their names but their blurred faces preside my job. That is the vertigo: I know myself responsible. I apologize in advance and give myself some hugs and pats on the back. I need both of those from whom are coming and whom we'll know each other through the magic of the pages of a book. Also expect apologies and hugs from these characters whom I intimate and start to become part of my new obsessions. Apologies and hugs for my dizziness and chasms.

Madrid has changed a setting sun for an exultant moon that reminds me where I must put all my attention now. Its anonymous passers are mirrors of all those strangers around the world for those whom I seek to give substance to this story. The lights in the windows are revelatory of those rooms where we'll sneak to steal the time between words. I seek desperately envision angels and demons on the ledges of the same rooftop. This writer puts the soul into everything he writes, hence my usual missing beats. I left, therefore, part of my soul between the lines waiting to deserve your affection. I'll pawn the rest of my soul on this story, because half of it I sold it to the Devil for an impossible dream ... and I think I will have to pay.

These are the words of a madman. Now I must return to work.

The dark shadows lie in wait from the top of those masses that hang on this hostile place, fill of dangers and spilled blood on its streets.

Night, night again... and winter looming. I remember pencils and brushes everlasting hanging around, I don't know if I hate them, always lurking... What do these two say we have to do? So many windows in this place, and all looking to this so sad New York.

These two morons talking about performing, reviewing, coordinating... speak. A new window of N.Y., and "Stains" with a feverish outburst hurting the gloomy buildings. A new episode, and "Hats" with trembling hands, typing, cornered by words.

I am tired of gods and demons walking all day around here. I'll find peace in bed for a while. I'll find light and Luz. When I can escape from pens and brushes, I can see her walking in silence. And if seeing her the sleep doesn't come, no matter, when the circles hit the ground I'll go again. I think I need that bank where the wind comb my gray hairs in Ciempozuelos.

I'm back... Sorry about my little relapse. I really feel much better. The truth is that, after a week away, and believing that this space would be forgotten after my first post, I find that still stands and that some people already found interest. I guess that first post doesn't make justice to what it's truly cooking. It did justice however to my mood a week ago, but that's what the pills are for, and this short week of observation, hahaha.

My bipolar state makes my mood very rocking. I don't reach the paranoia of "Gray-Haired" or the obsessiveness of "Stains", but to base all the work on a doomsday argument makes your neurons suffer. From the point of view of the ingredients to work with, is a scenario more than delicious for any writer. A prediction of the future? that's what the "Gray-Haired" sometimes persists in trying to convince... that's another story. The two interventions endorsed in this blog prove it. I'm back and is find him again being in the phase "I'm warning you, incredulous". I know tomorrow will come through the door and tell us that nothing is certain, and too that within a week more he will play Nostradamus. I spoke with "Stains" about this. My greatest difficulty is to translate the information he has in mind into a scenario (presumably fictional), some characters and a story. That's in his head and I need it to be in mine. I talk to him, but sometimes his discourse is sometimes vague and incomplete. I ask him about the characters, backdrop, feelings, sensations... which are to me essential material for creating, and he doesn't need to give form to an image. I put in quotation "supposedly fictitious" because he keeps saying that its source is the conversations with that "American" in our mental hospital.

Stains and I agree: Canas is an unnecessary filter. If I could meet him and talk to this "American" the information would reach me without filtering. But he absolutely refuses. It has a strange zeal in this matter. It is as if the talks with "American" were more than just discussions. The truth is that we have investigated a little and nobody in Ciempozuelos knows the existence of the "American" (we don't even know his name). It is as if he wasn't real, as if "Gray-Haired" was making his up and would not admit his absence. However, in all honesty, I must say that the reaction of nurses and hospital medical staff is just secretive. It's not a "no", of course. It is as if they're hiding something, as if there's some sort of pact of silence, and I find it weird, really.

In short, the atmosphere is good, on the other side. I've seen that they have begun to share drawings and other images (I do not feel guilty about what I did the first day). It seems, therefore, that we have a good streak or that the medication makes me waaaaay more positive. For example, to you to understand our work environment, I attach a funny picture. The image has more than meets the eye... if you find us, we’ll give you a round of applause via e-mail. Day and night here, artificial light, chaos, painting, obsession ... and a future to come. Where's Wally? What about the "Gray-Haired"? Bets are accepted.