In the first book that's been made in the workshop Nergal says:

–     Your age of power has reached to an end, you can be wrapped up by all the religions, by all the teachings protected in fear and mandate, but your judgment day is nothing more than an open door we can go through. We'll return to look for the fertile harmony of the primitive.

Priests of the art

"The Stains" just commented after a long laugh that Santiago Sierra has just rejected an award from the Minister of Culture of Spain, Ángeles González. Dropwise start times of rebellion. At last.

I've long observed that under the proud gaze of a gallery owner there are trembling hands. The press stutters when writes about the art hierarchs and its attendant culture official employees. That the independent critics clean their gaze and diverts it away.

High priests of art, time is running out. And you begin to see cracks in your big shoes. These cracks will grow and grow, we go towards 2038 ... There, a sword with nine snake heads is thirsty.

The wind has brought to the terrace the smell of incense! My stomach has soured. The Pope has flown these days nearby by the sky.

Moments of the 70s come to my mind. I remember the van that had to drive us to prison. I still remember the definition given to the crime (the crime of drawing) in the trial "Scorn to the Catholic religion." Scorn, strange, sounds like abuse to the flesh of something that has no body.

Of the few deep smiles I can remember in me, one came when I was said that I'm on the blacklist of the Vatican, and that even appears to the Internet, what a great prize ...

Malefic TIME is near, Aquarius is coming, and Pisces is close to the end.

It’s said by the I Ching, by the other hidden Major Arcana of the Tarot, the Aztecs said it, Malachi said it, "El Americano" ... there we'll find each other, in these streets filled with rubble...

Damn! so many windows, so many windows, so many cracks! I've been months painting windows and cracks. Fed on coffee I'll be able to finish this I have nearly finished. A view from the air ... I like to travel at night in my dreams flying like a bird, everything is silent and the cold wind slaps my face, broken buildings with thousands and thousands of windows and holes where once there were more windows, some cracked like lumps sugar, I glide and hear increasingly sounds, just like glasses falling and cries echoing in the empty streets and dark buildings. I always awake when I'm about to enter one of these streets which by now I don't dare to represent in depth.

Fuck! "Gray-Haired" is scaring me with his stories and visions of these strange and terrifying creatures that await us in a few

years. I don't know whether

to believe what he says about "the American" and the stories he tells him, His words beat me and "the hats"' heads, well it does not take much effort to kill the few neurons that remain in his with those bottles full of pills he takes... As I was saying, the "Gray-Haired" starts to get me tired, I've said a thousand times I would like to meet the American. Even more! When we have been on the psychiatric hospital in Ciempozuelos I've never seen him in the dining room, and "Gray-Haired" always says he's always held with certain exceptions, blah, blah, blah ... and what I say is: How does the old Gray see him? It's true that he's very clever but I'm beginning to think, despite my doctor's insistence in me following the treatment and that it's good for me to stay in Ciempozuelos occasionally, that those two are really crazy, they do need a doctor and a treatment, but for life!

People call me the "gray-haired". Do not want to bore you story-telling how we have been provided with this space, or whose interests lead them to whoever has done it. But I knew that when it was built, these two lunatics that move around the workshop, would appear around. What can you expect from some fellow travelers you meet in a mental institution? Anyway, both "stains" as "Hats" are inevitably destined to live this story, and better to have them around... (I do not plan to remove the cutter from my pocket at any time).

I know they don't believe the story I told them, but "the stains" has spent several years, since I started to story-tell him, thinking about it and with his uncontrollable urge toward the brushes.  Here all the walls are flooded with an acid New York. And "the hats", goes around crazy for a few months, taking notes and trying to collect all my conversations I have with "the American". (Poor them, they believe that this will reach a port). I look at my dark circles, my cough and my fatigue, and my heart tells me that soon I will be back on those walks in the gardens of the psychiatric in Ciempozuelos, I will leave them here in this feverish and sick place, and again I'll submerge myself in those endless conversations with "the American". They think he doesn't exist, it's the same, no one believes in him, not even my doctor. Same thing happened to me when I talked to Marie Antoinette, said his name was Olga. 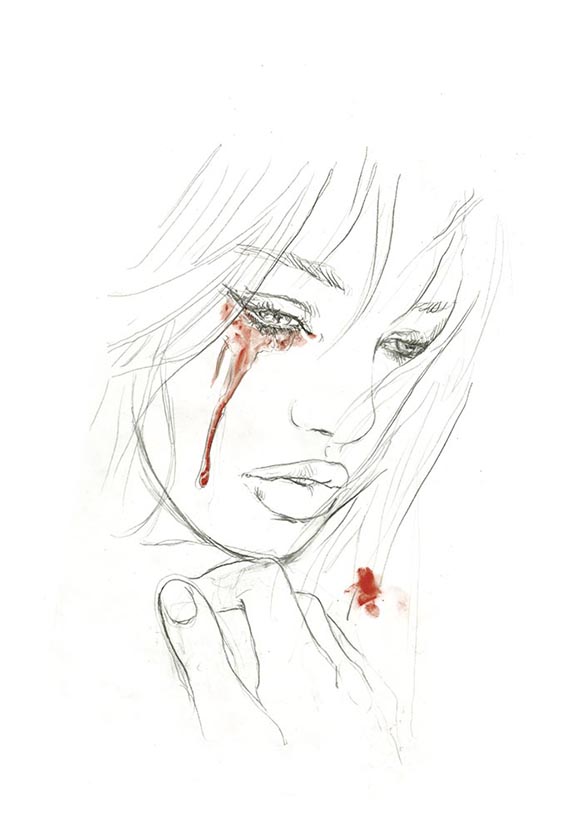 I've known "The American" for twenty years (and they say he doesn't exist), he has told me many many things ... Sure he's been there, of course he has seen a cracked wall New York...  I've almost seen it so many times he has described it to me. Guys, all you see out the window goes to hell, the American told me, he has walked the streets of 2038 and knows it very well. If you knew the things he told me ...

And here in this workshop, keep "stains" and "hats" trying to give shape to the events experienced by the American. What for?... I miss to spend a few hours with him on a bench while the wind punishes our faces, and I can imagine all that ... how many nights I've seen that long gray hair and have almost touched that skin nacre of Light ... (Though I shouldn't tell, I will continue gaining the qualifier of old pervert). 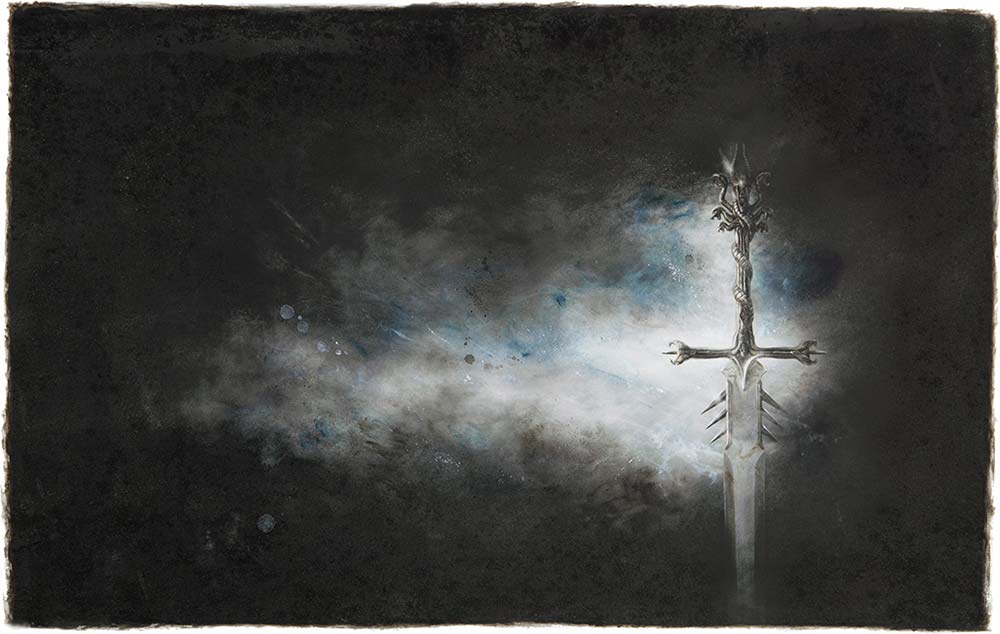 My head will blow out. How I waited this was set in motion at least! Carrying months into this matter and cannot talking to anyone is a nightmare.

I guess I'm not the most appropriate to start this... but these two have gone to take a beer and it's me who are here alone, so I take advantage. I'll be honest, I think is the strangest project that I've been involved, but it's a project carried out by three mentally ill, so I do not know where or how it will end all this mess. When you bring together two makers of images and a wordmaker in the middle of psychiatric treatment, you put them on a plate an amazing story (not meaning good, but unbelievable); you risk opening the damn Pandora's box. As I'm supposed to keep a silence clause, I'll spare you the names, but the rumors are true: the "gray-haired" is buzzed. I swear! Worse than I imagined, and the "stains" is a scary obsessive-compulsive disorder. Well, I shouldn't speak very loudly. Everyone thinks I'm in Madrid bundled with a Master when the truth is that I have come to treat my problem of bipolarity. By the way, those sons of... my friends call me "The Mad Hatter" (very successful, very subtle) "Hats" for short, which is more informal.

As there are no dens in Madrid! we had to meet in a psychiatric hospital. Call it irony of fate, predestination ... I prefer to call it black humor. At the beginning everything was great. Speaking of how the world goes, the "gray-haired" drops everything's going to get worse, there is a guy admitted in the same psychiatric St. John of God who has told incredible things, supposedly from the future. He starts telling. Damn, here's a story! 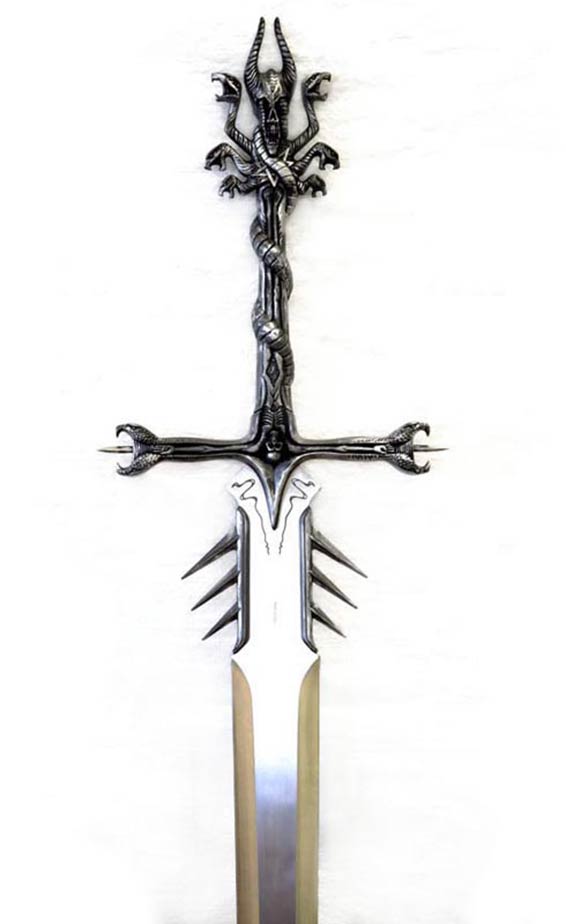 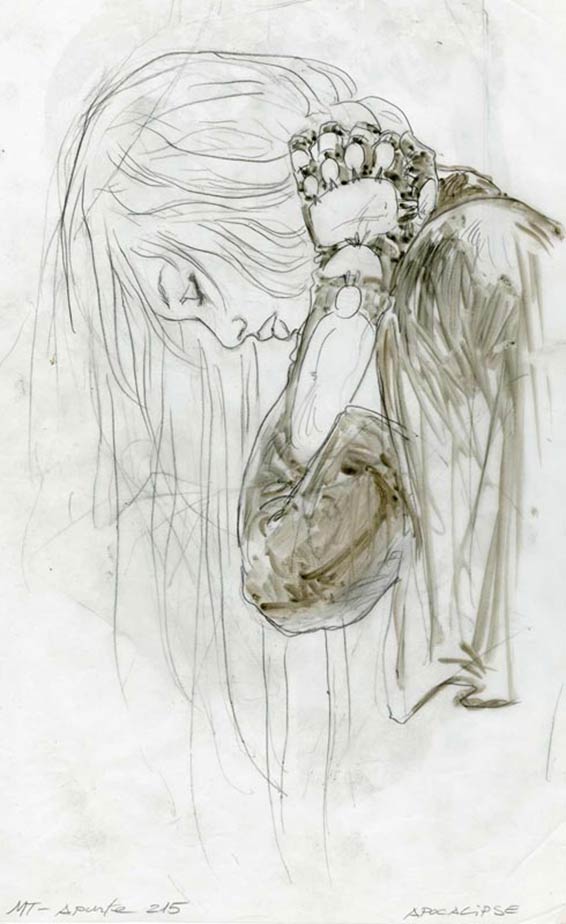 Anyway, we've been three months locked up with this shit and there is a bit of everything. They draw and I write. This is a crazy project, I notified, no literary metaphor. Warned yesterday that it had enabled this website, so I'll try. It will work as a little therapy. (Speaking of therapy, I must take the fucking pills, just a sec). Here I am again. As I was saying, they leave me alone and I get naughty (I'll have to bow to the sympathetic character that I have endorsed as a pseudonym). I've seen around some slides of the "stains" (hahahaha, the original measures 2x2m! "A complex? Hehe) and he will make a tremendous laugh me uploading it around here (that's for the stud!) I don't know about him, but I've been laughing for a while.

... And to the "gray-haired" it'll give you a glance to a piece of junk we have around here. Hope you like it. I don't do this out of malice, just out of boredom, hahahahaa 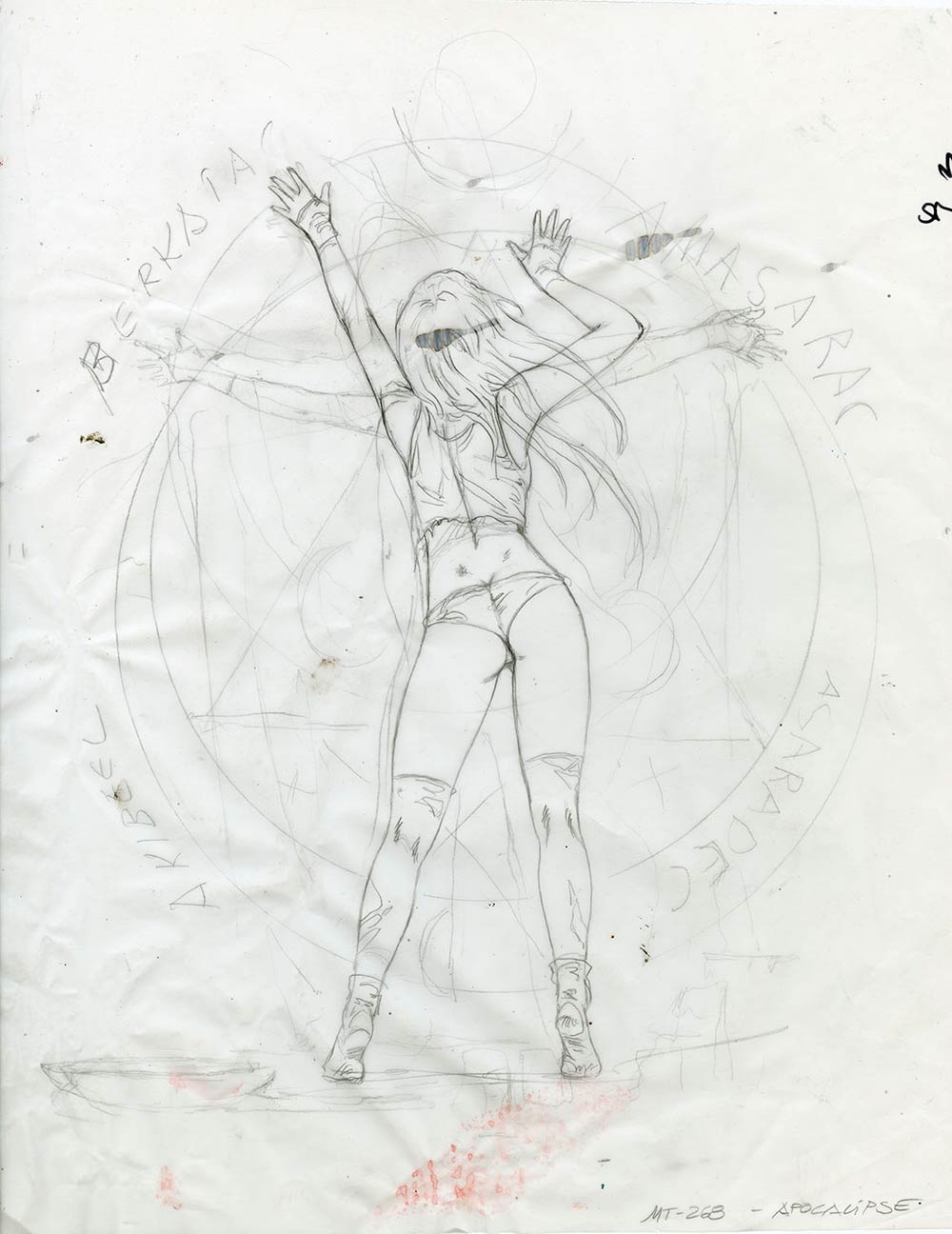