MORE REAL THAN EVER 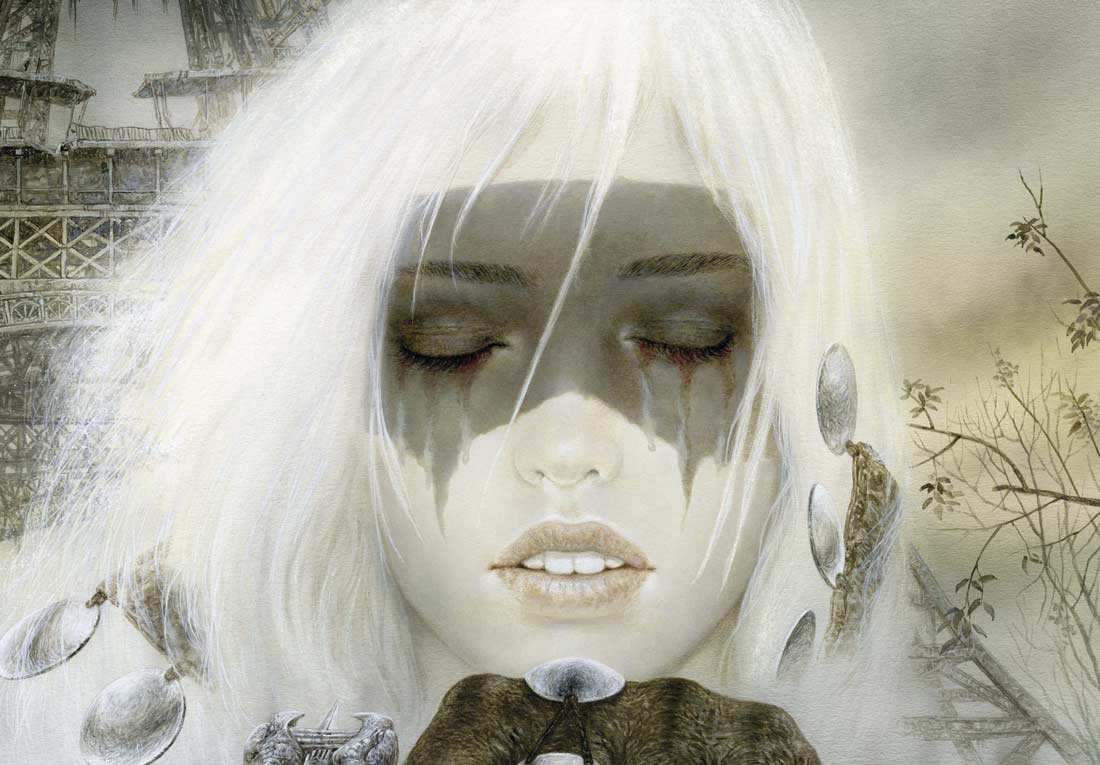 Laberinto Gris is proud to present, exclusively, the sale of the original work included in the last book of the trilogy Malefic Time, Akelarre, for first time, the original work it will be within your reach. Works that have never been seen before, the very first ideas, sketches, and concepts of the outcome of a complex universe, full of challenges and sacrifices, creating and immersion between its lines and strokes for the enjoyment of this post-apocalyptic and captivating history. 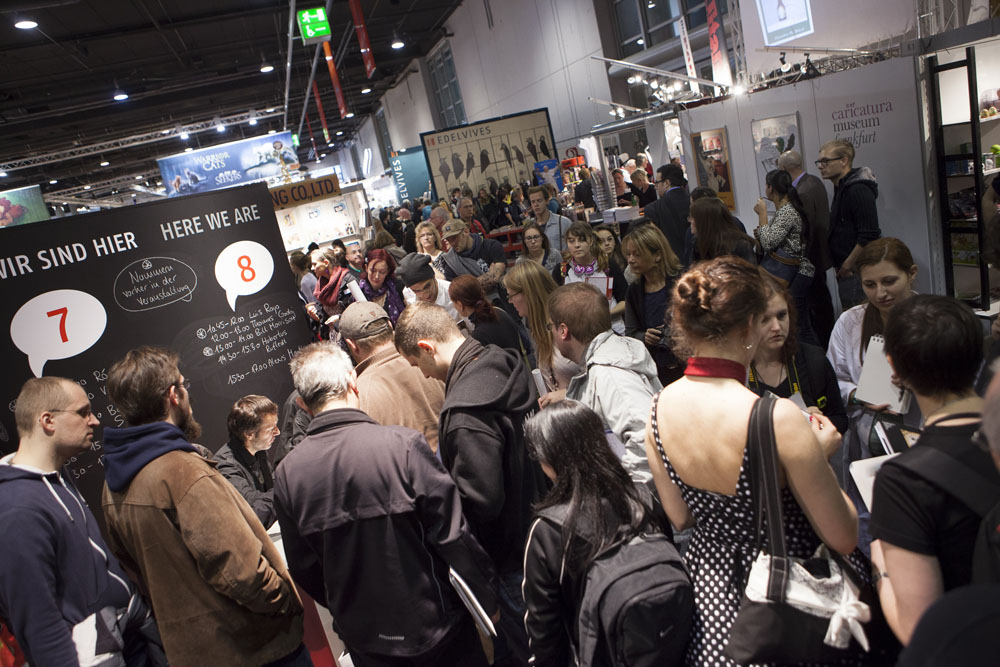 Luis Royo & Romulo Royo - Fráncfort Book Fair. From Laberinto Gris, we have made our own selection of each piece for this exhibition, having as priority the enjoyment of our customers and collectors, giving you the opportunity to have in your hands on of these fantastic pieces. Within this exhibition you will witness how two styles, such as illustration by Luis Royo and painting by Romulo Royo, apparently so different, come together perfectly to create something unique. The union of the best of both worlds gives life to the young protagonist with white hair who has been present in the lives of the artist for more than 20 years and comes to life being the female figure leading the way through the trilogy Malefic Time. A team work that goes beyond illustration and painting. An ambitious and visionary project where artist wanted to create a parallel word where you can be able to enjoy Malefic time in multiples formats, from seeing an original work, listening to a soundtrack, playing role-playing games, or even predicting the future with their cards of tarot. 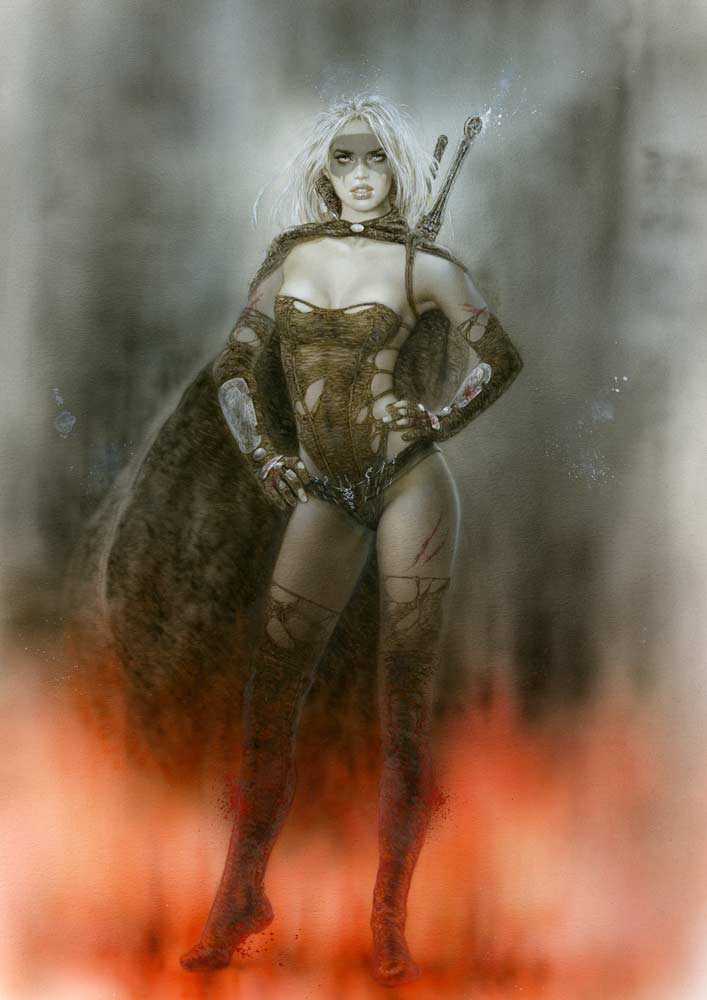 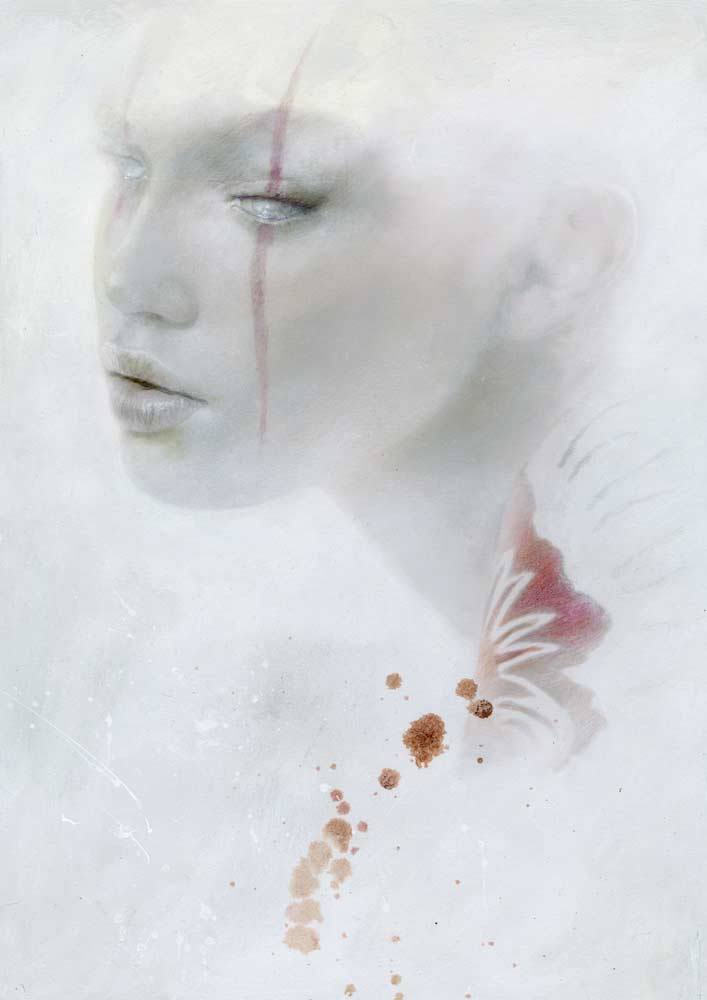 VIEW MORE PRODUCTOS OF THE EXHIBITION.

MALEFIC TIME. Year 2038. New York. Darkness in the sky and ruins on the surface. The world is no longer as we know it today and its covered by a dense and dark fog both day and night. The streets of New York are not safe and that’s why Luz is hiding inside an old factory, far from battles and mess. Luz is a young, feminine girl with platinum-colored hair and a hypnotic presence. She is convinced that turning to history, to the past, can help her understand her desperate present and change the future that awaits humanity, or what remains of it. 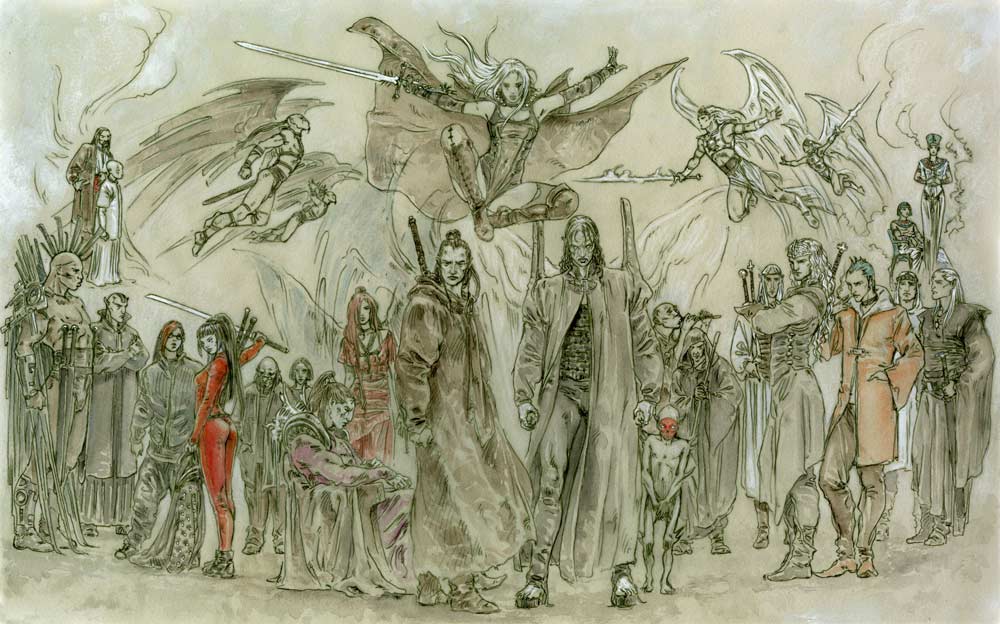 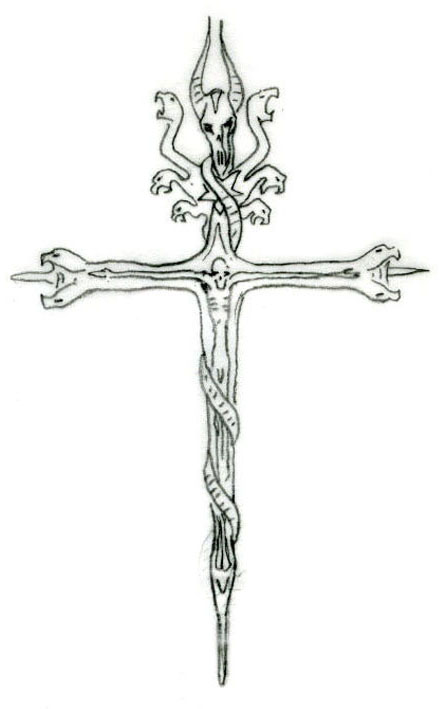 Luz: the girl with the tears of blood. She has spent her whole life wondering about her nature. But she has no answers. She has the key to decide the future of all mankind, in her hands, her sword: Malefic, but she is not conscious yet. Soum, will appear in her life soon, and she will be the guide through the way. A path of spiritual search and training as a warrior. They will travel through tenebrous cities and places facing battles and adversities.

Luz is the chosen one, it is the 13th descending of Luna and Mars, or what is the same, the 13th incarnation of the elementary principle of the feminine, represented in the Mother-Goddesses, having the figure of Lilith as a concrete reference of them. Since she is a little girl, she has been trained to do so. Is her final destiny. But Soum has a very importan role in Luz’s journey. She came from Tokyo, from the sect of the 13 moon or 110 Katanas, specifically to unite his own destiny to the 13º. 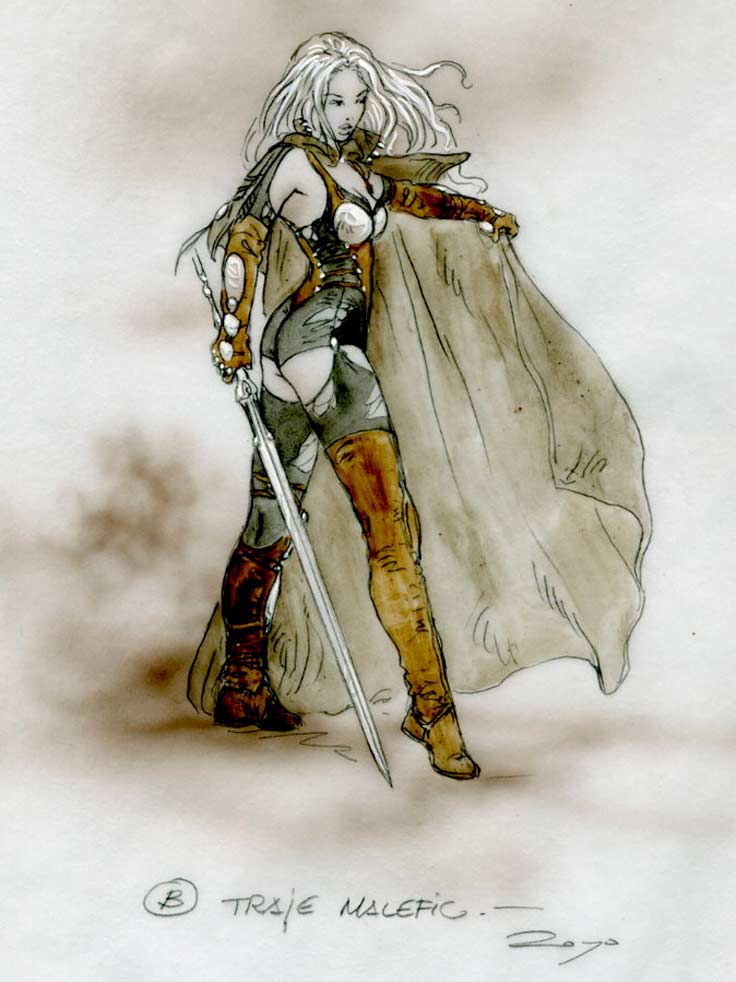 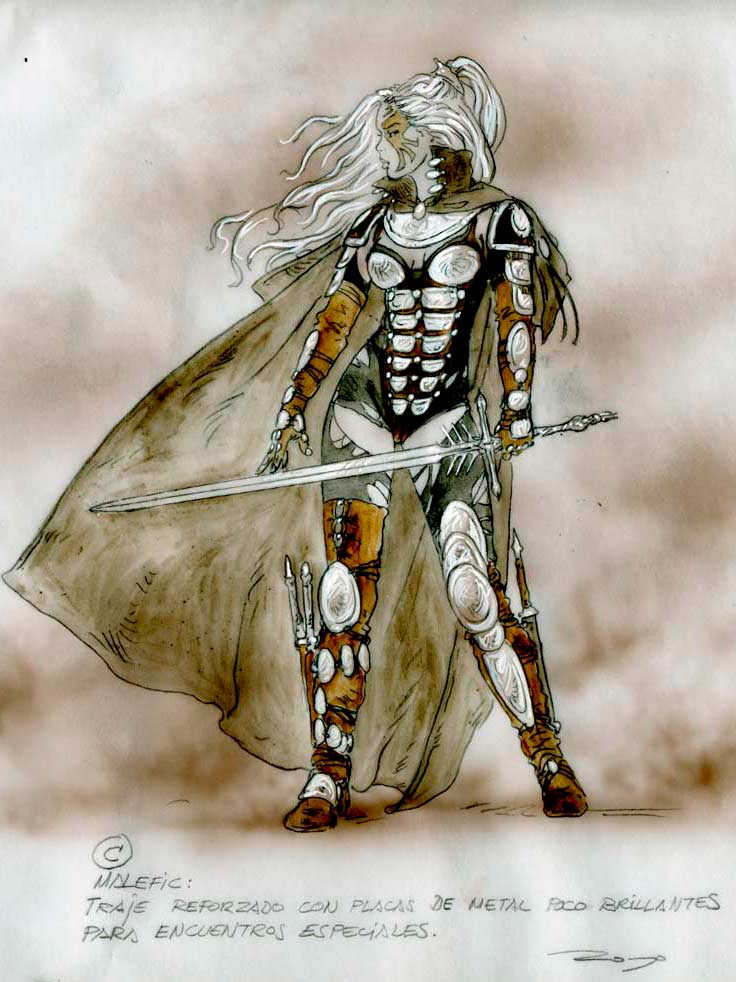 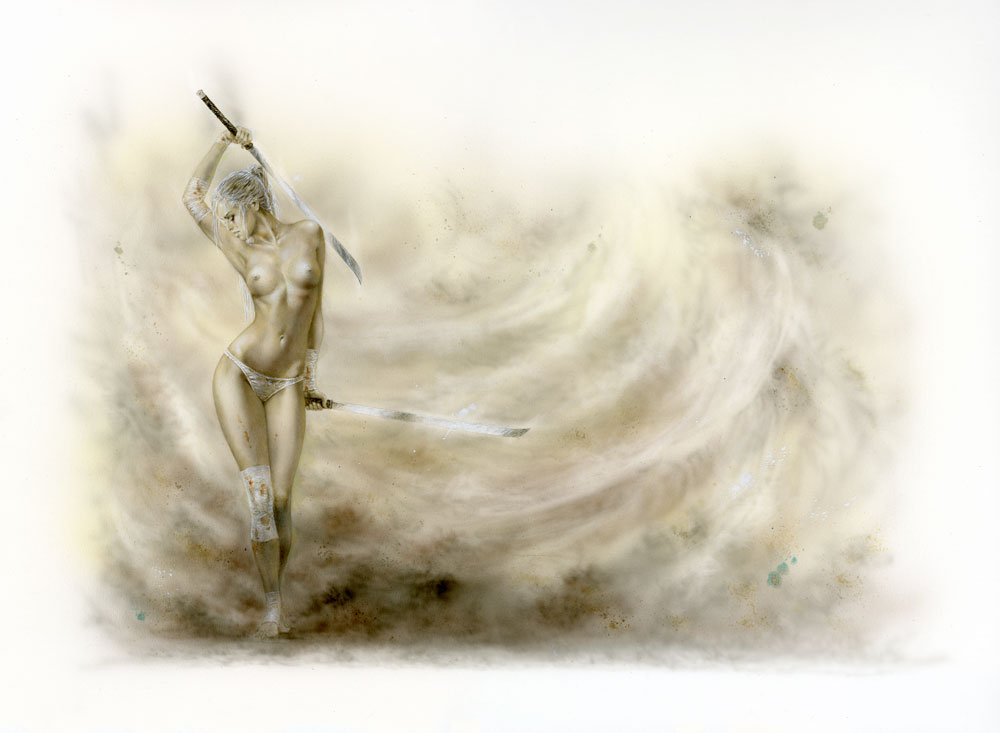 The Malefic project goes back to many years ago when Luis and Romulo captured for the first time that idea they both shared. They called it Malefic Time and created Luz as a hero for her story. It was set aside as a dream yet to be realized until in 2010 they decided to resume it. And this time they did it in a big way. Creating impressive original works of art that later shaped in his books. A huge project that transferred the sheets of paper to produce graphic novels, sculptures, soundtrack, figures of the characters, merchandising ... 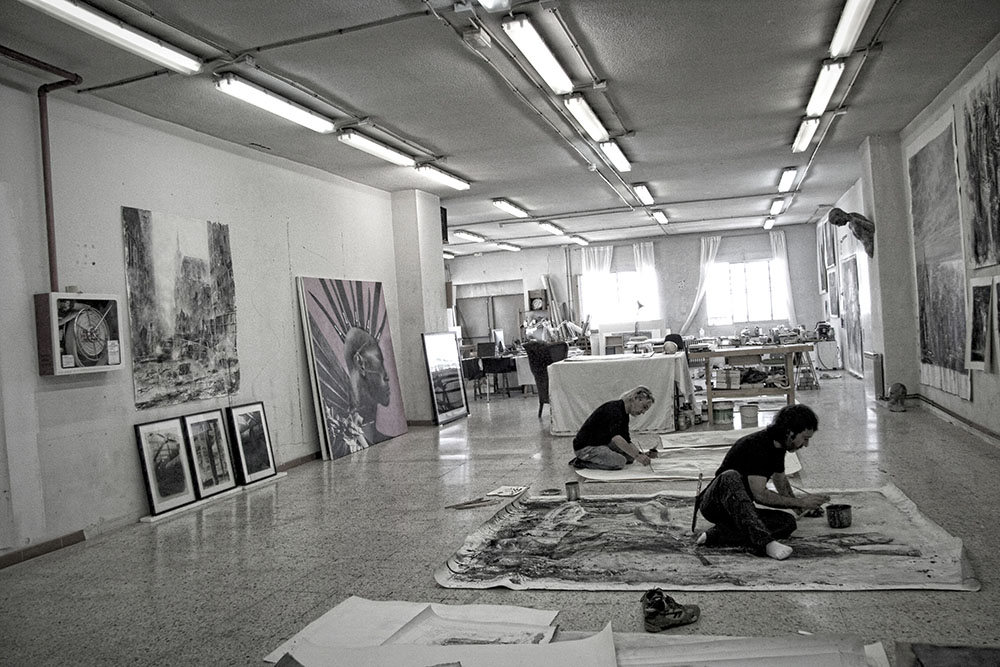 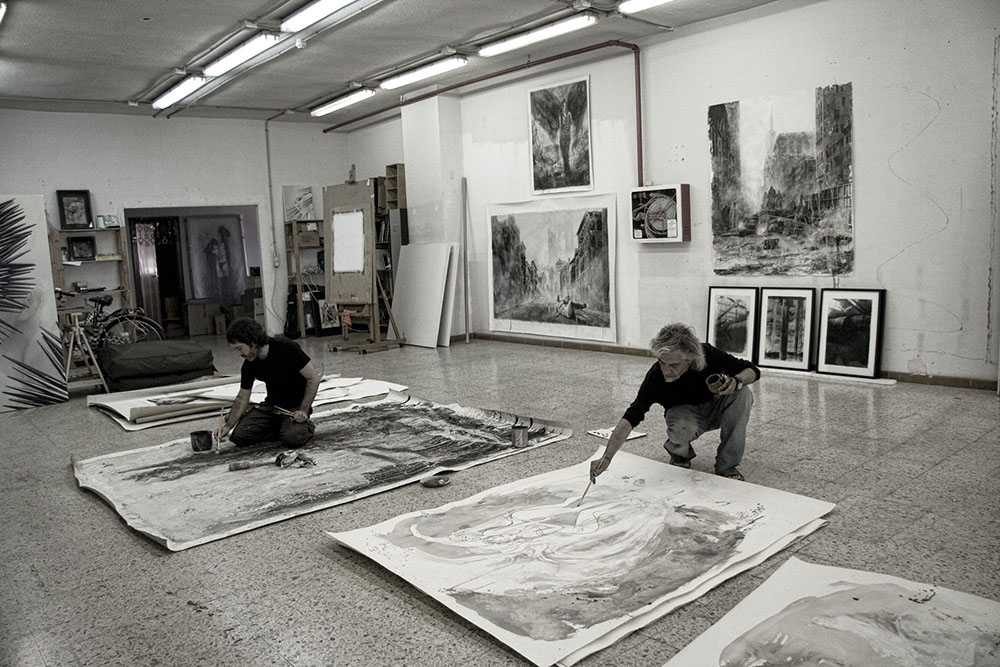 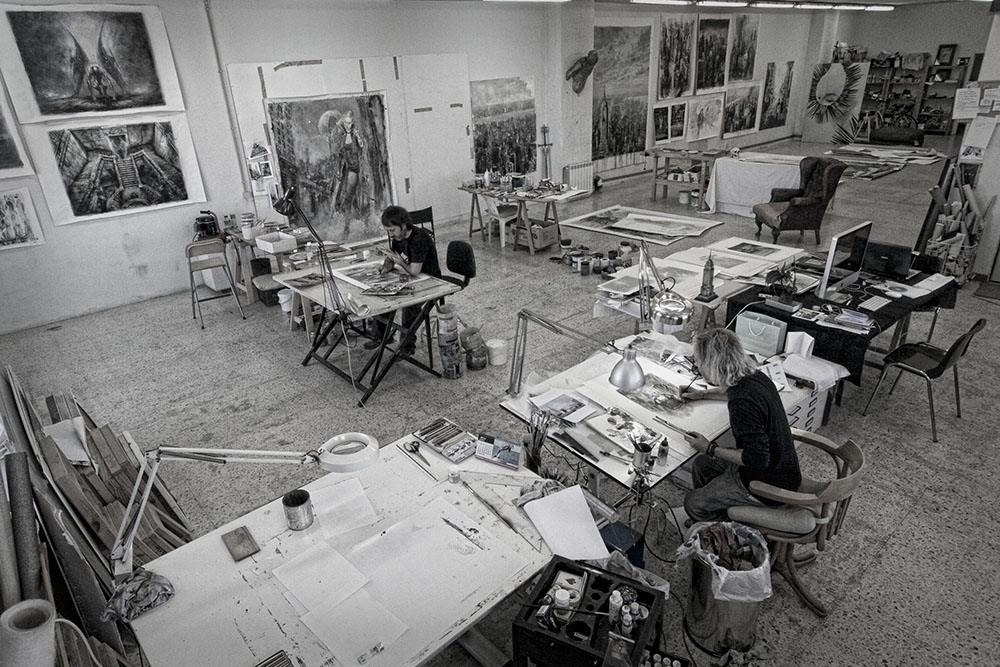 The soul with the desire to start over. Reconstruction, renovation, resurrection. A soulless workshop full of demons and madmen between walls dotted with images. Papers, canvases, brushes, words, screens, keyboards, sounds. Nicotine smell, solvent, fluorescent, lust, dementia, future with echoes of the past, past without a future. Hours of jail imposed, redundant asylum, insomnia intended, forced, persecuted. Nightmares with open eyes. Headless coffin, wrapped in corners with new names and new memories. Secrets and corpses in the closet. Alice on the other side of the mirror. All this has been necessary: Malefic time, is the result. 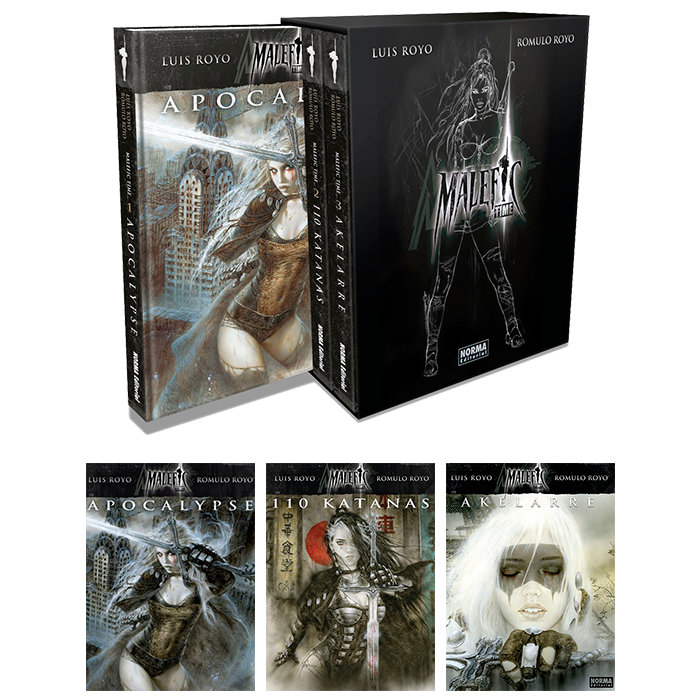 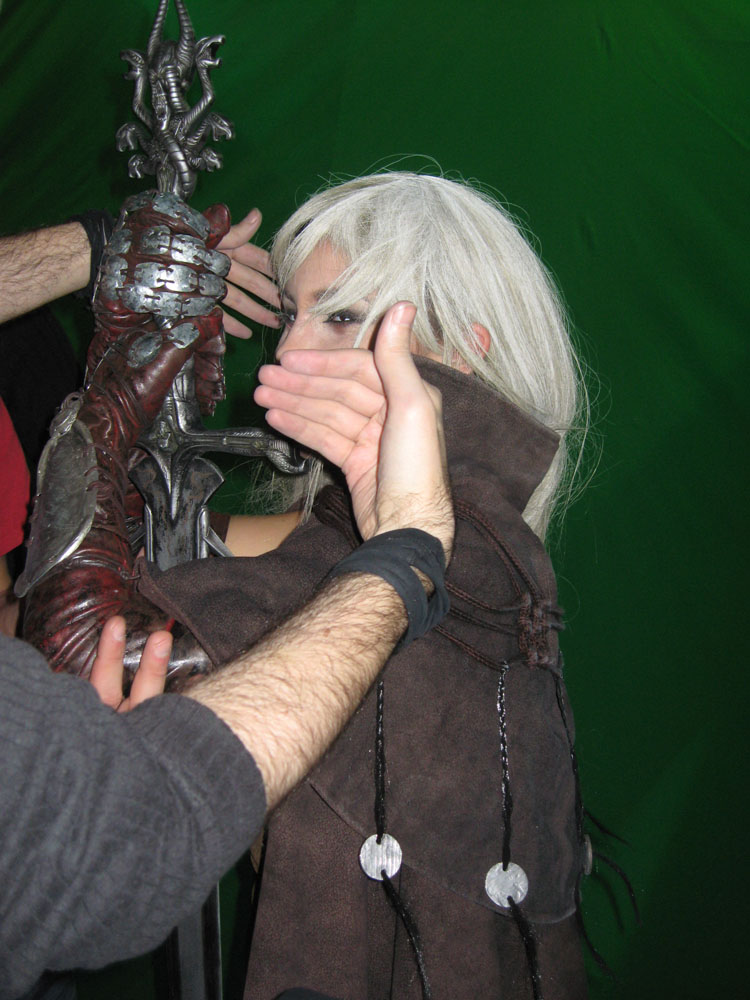 Recording of the Malefic Time Teaser 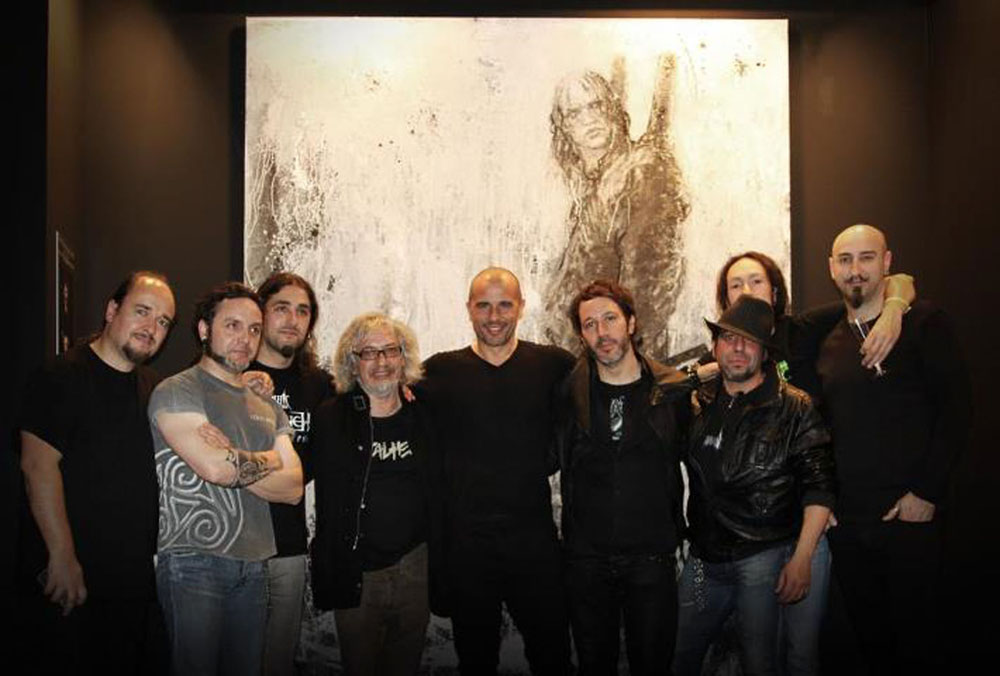 Collaboration with the Avalanch Music Group. 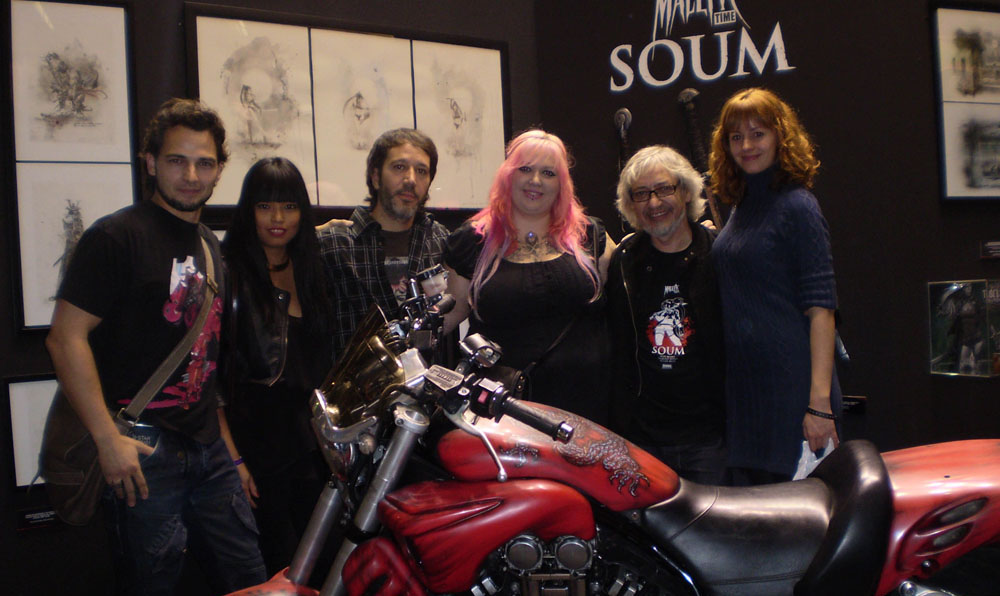 Exhibition at the Manga Salon of Barcelona.

"The interesting thing about the Malefic universe is that in its pages we can find paintings whose originals are two meters high and are authentic works of art, combined with others of smaller size, which have a wealth of line and detail worthy of a goldsmith, a combination what makes this book something very special". 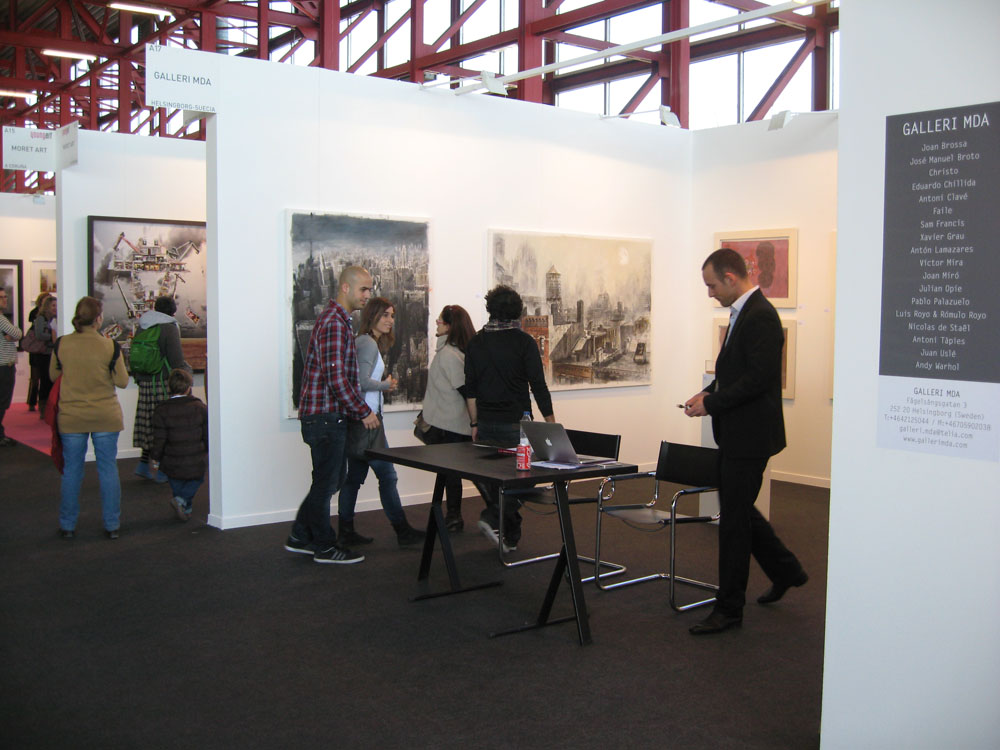 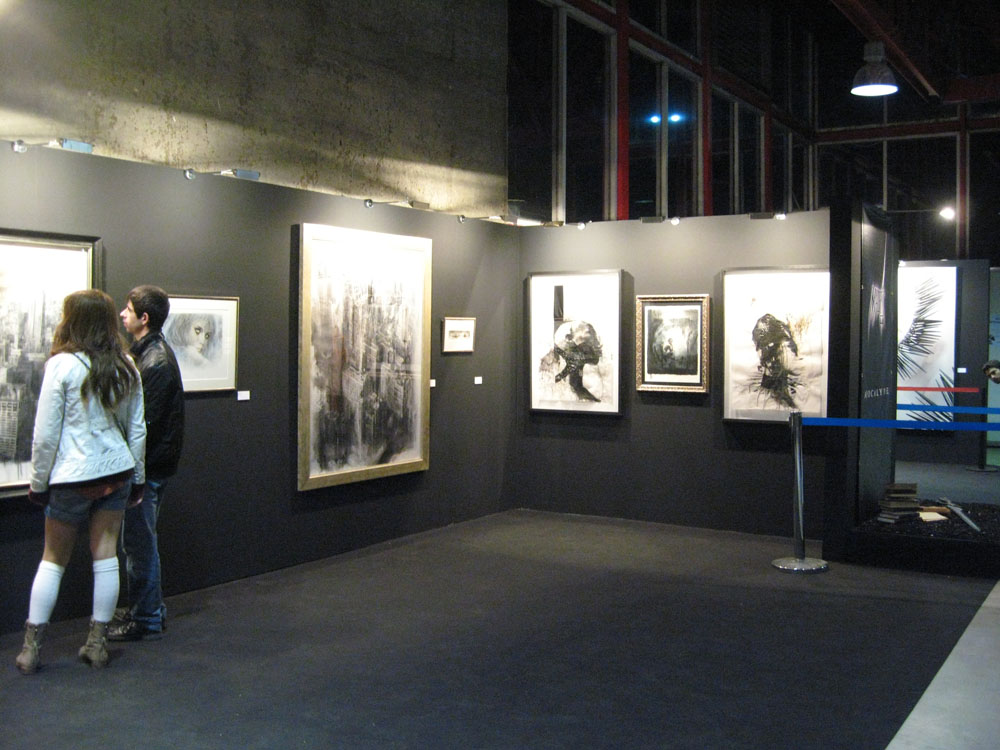 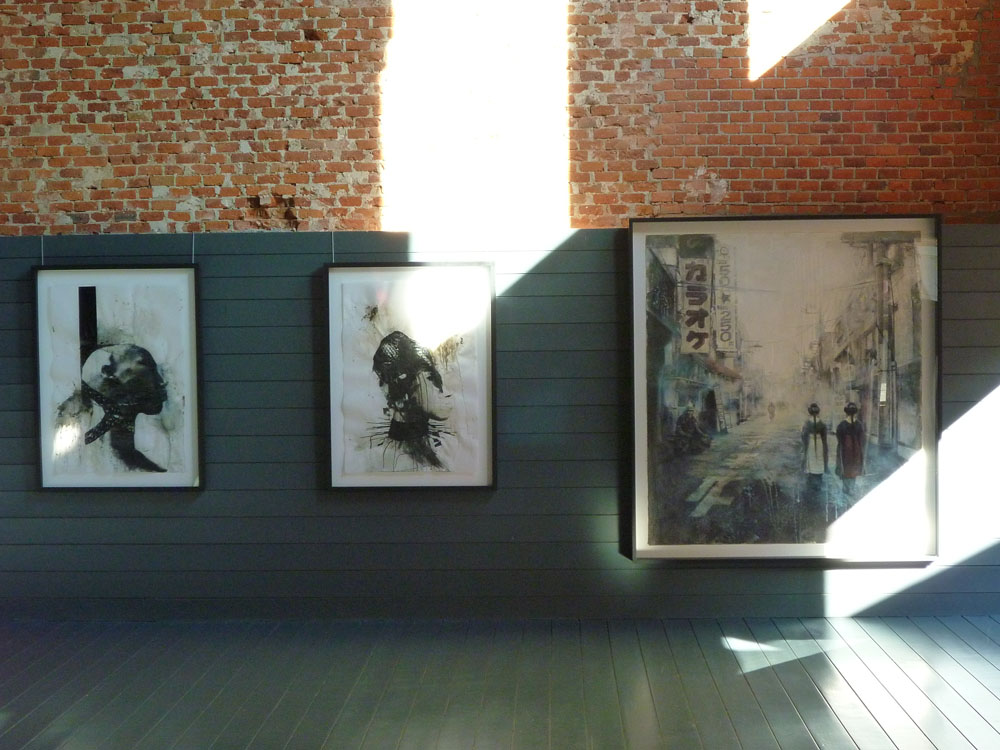 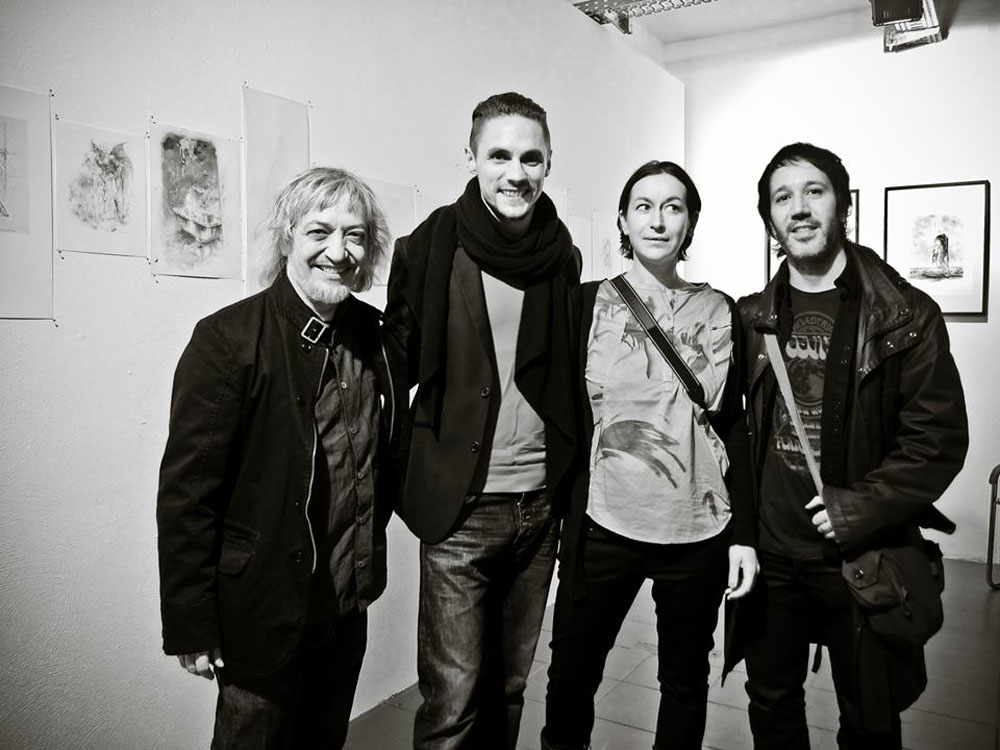 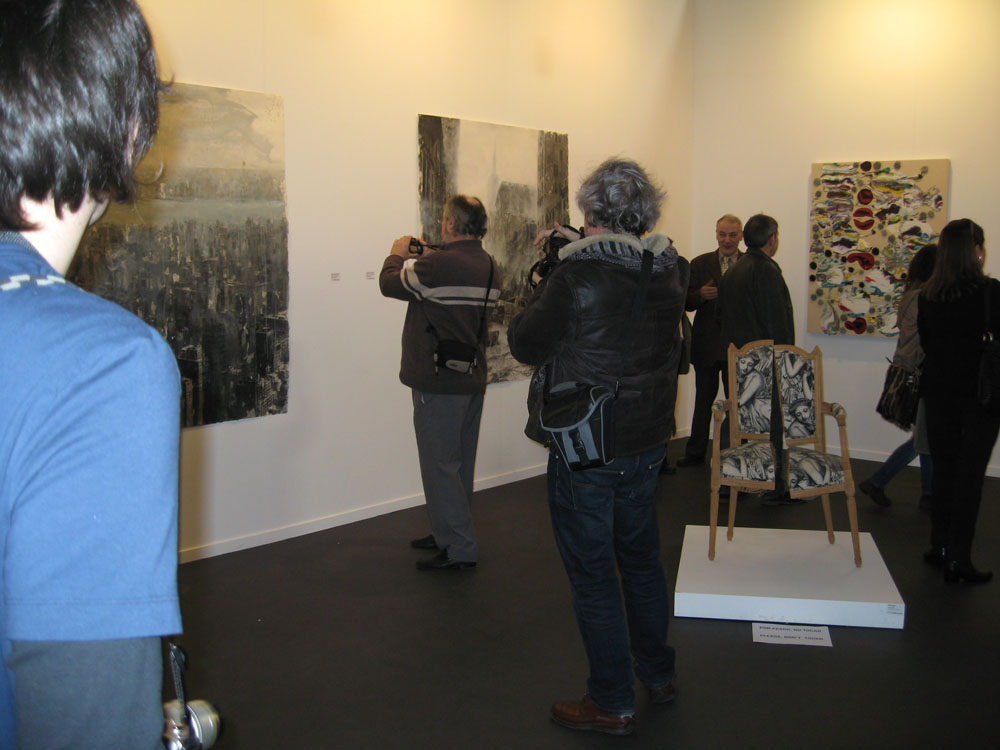 Both artists have a long and successful career in their respective styles.

Romulo Royo began his career in 1995 making illustrations for Norma Editorial and his work is internationally published since its inception. Since then he has not stopped reinventing his own style while at the same time he has been consolidating as an artist, exhibiting his pictorial works all over the world. Perhaps one of the most representative projects as a painter is "Goddesses of Nibiru", his goddesses that reflect the game of myth and reality. Delicacy and strength represented by the female figure.

Luis Royo harvests his greatest successes as an illustrator, publishing with the most important publishers around the world, such as Heavy Metal, Bragelone, Tor, NBM, which frequently use the art of Luis to illustrate covers of books, video games and much more. Luis works in an environment based on themes as suggestive as apocalyptic futurism, technology, mythology, fantasy or samurai aesthetics. All this watered with a lugubrious and violent tone that highlights the contrasting eroticism of his muses and warriors. 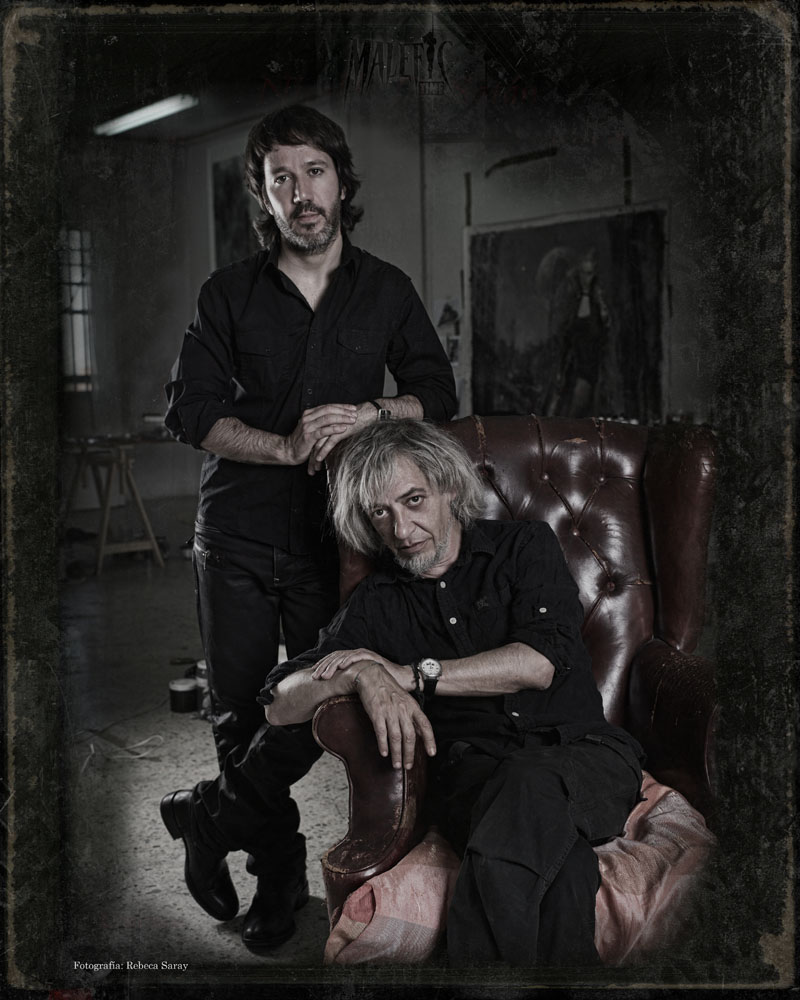 Luis Royo and Romulo Royo are two of the most valued current artists in the world, authentic visionaries who have exhibited in the best galleries and who have taken illustration to new territories.
-RTVE.ES

Luz is the name of the protagonist of this first installment. This young gray woman wields the Malefic sword in the battle waged by "ancestral winged beings who fight for the lunar and solar powers", according to Norma Editorial. De Luz depends on the future of humanity, so it is not surprising that it has seduced the members of Avalanch, who have thrown themselves into the arena with a sort of rock opera and, in addition, in English. The guitarist and composer of the band, Alberto Rionda, speaks: "It was a very nice challenge. It has not been another album, we have created a universe and we have to satisfy the artistic concerns of Luis and Romulo. In addition, the ground of the rock opera had not been exploited. We had made concept discs, but this goes further."
-El PAIS

Malefic Time is a near, harrowing, hard future that drinks from all the prophecies that predict a cycle end: Malachi, the Mesopotamian, Aztec and Judeo-Christian cultures ... "I think we are now entering that apocalyptic future - the Aragonese illustrator - We are devoted to him, it is the end of the world as we know it, to give way to a new one, if one does not look at it catastrophically, it is a positive thing, it is a moment of change".
-20m

The originals, seen live, make it clear that each illustration of the book comes from a work of art, with impressive canvases of three meters. They have also created sculptures.
-EL MUNDO

To finish we present you the Malefic Time Teaser that was made and that you have been able to follow in the lines previously written.