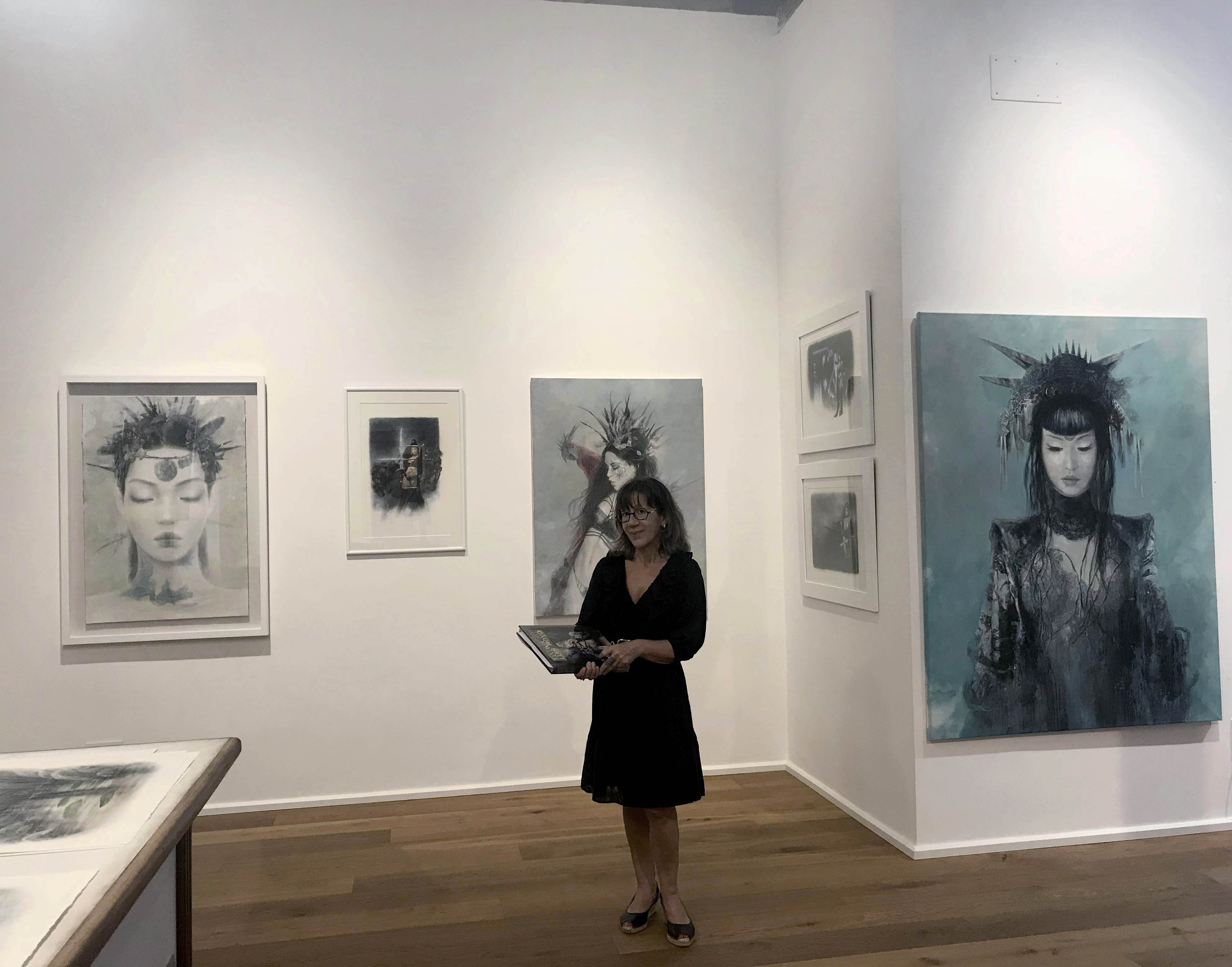 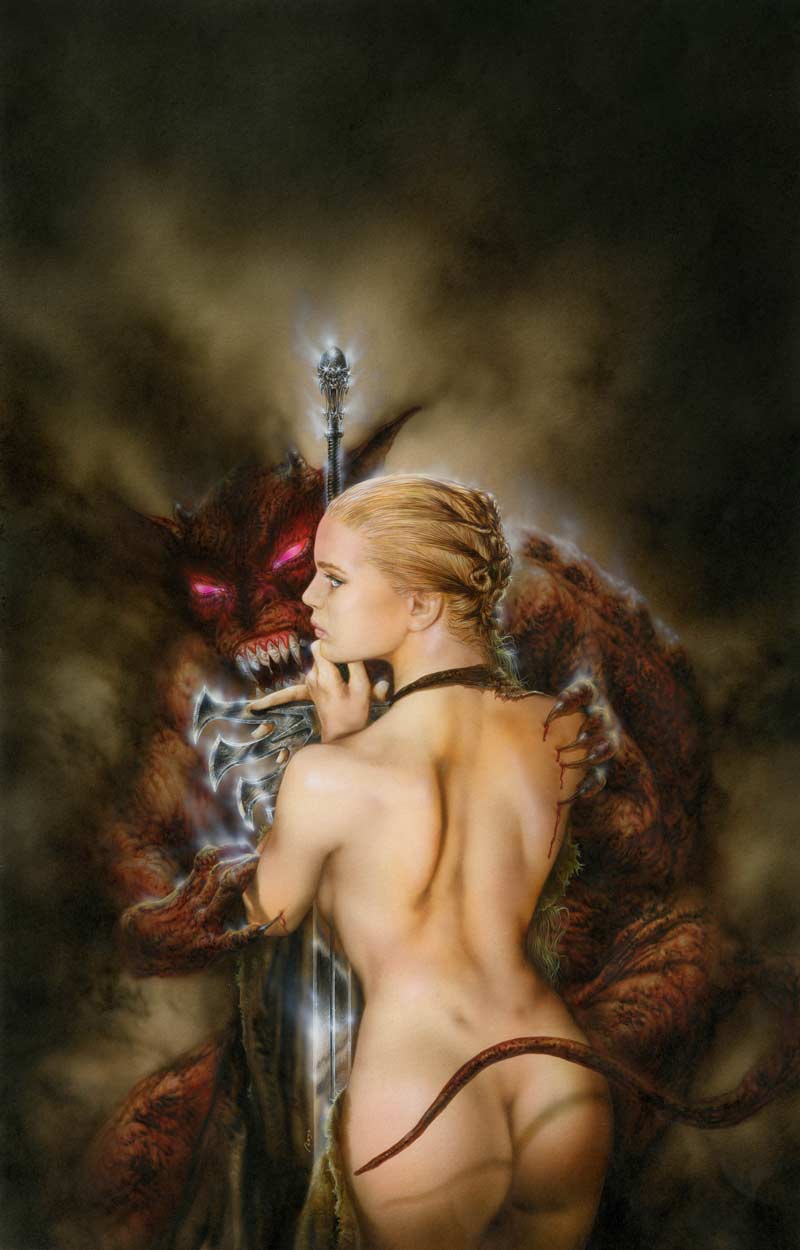 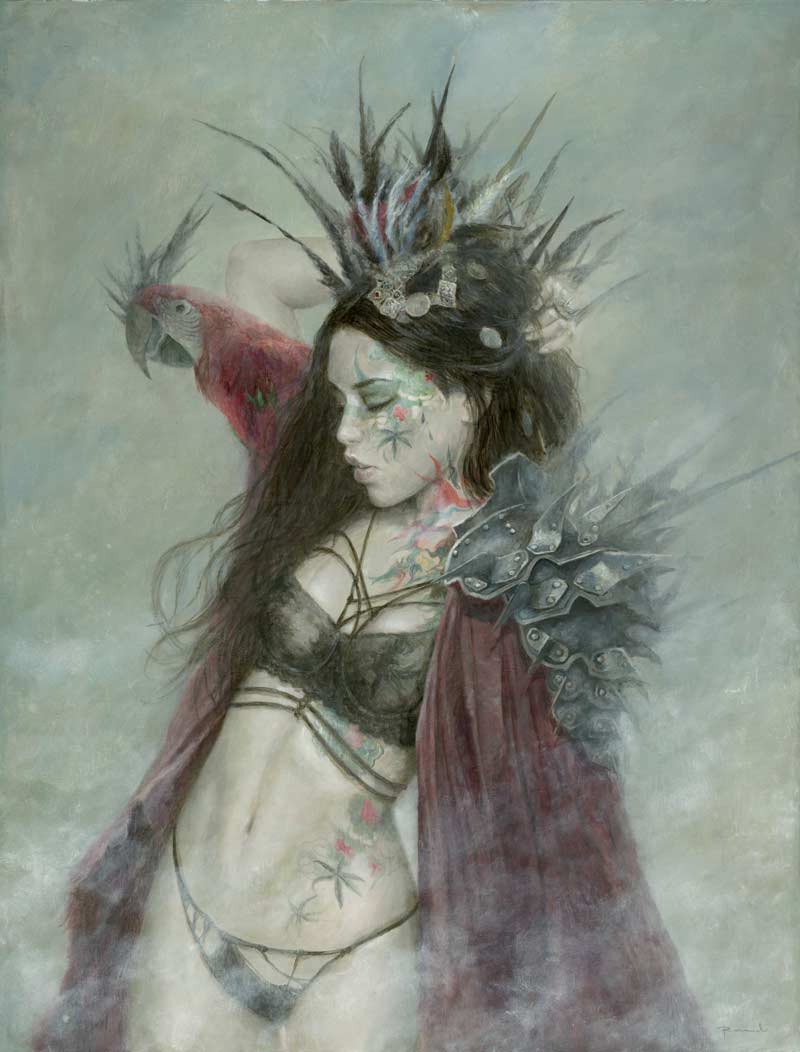 At Laberinto Gris we have hundreds of artworks that come under this definition. It is the distinctive hallmark of both Romulo Royo’s and Luis Royo’s work.

This title could be used to describe many different trends in the field of plastic arts. A brief glance at history reveals that this artistic tendency dates back to ancient times. It was much loved in ancient Greece and Rome, in baroque art and in the 20th century. It also featured in the early years of cinema, comics, illustration and later on, in video games. It has now become a solid trend in these so-called popular arts and is an emerging tendency in a new generation of painters.

In previous decades contemporary art fairs focused basically on conceptual artwork, but the trend over the last few years has led us to appreciate a certain figurative emphasis which is gradually taking over from abstraction. And even before this change, comics and illustration had featured fantasy for years, films had already ventured into it and video games had taken it on board overwhelmingly.

Figurative painting basically came to incorporate a new pop or on occasions, ordinariness. Comics, along with graphic novels, favored this ordinariness, historical stories or biographies of well-known personalities. Films drew heavily on stories with a moral or superheroes (just one small highly-prized segment of the fantasy world). And even so, great series like “Game of Thrones” or films like “The Lord of the Rings” were a huge success. Manga (which was not exactly devoid of fantasy) continued to gain fans year after year and it was the same with video games. Now fantasy in the plastic arts has come into its own and started to gain ground and build up a following.

This generation of new painters involved with fantasy art emerged in various countries without any connection among them and they are now coming into the spotlight and exhibiting at new galleries which nurture this trend. As early as 2015, Romulo Royo exhibited a picture at the Arco fair which departed from the general trend of the fair and veered towards fantasy art, a tendency that he has accentuated in subsequent years. It is now clear to see that he coincides with a new generation of artists who, despite the distance separating them and not knowing one other, coincide in this return to the fantastic which has been with us throughout history. Furthermore, for decades now, Luis Royo’s fantasy illustrations have contributed his vision of the genre to fantasy magazines and novels, as well as to the dozens of books that he himself has published.

At present, the new art galleries that are flourishing in different countries, the most prestigious auction houses, like Christies, and a number of curators are all consolidating this art. Not only is fantastic art a powerful imagination generator in terrains conquered years ago, such as cinema, video games and comics, but it is also making its presence felt in galleries and auctions, gaining a newly-found importance.

In this compilation of fantasy artworks we aim to bring you the best of Laberinto Gris. 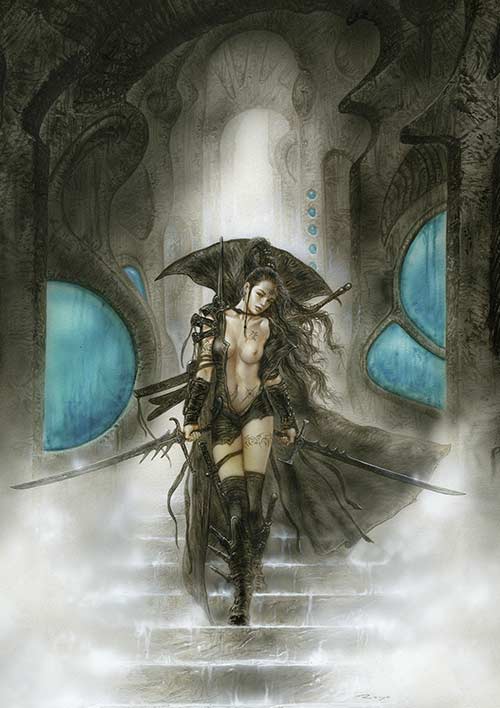 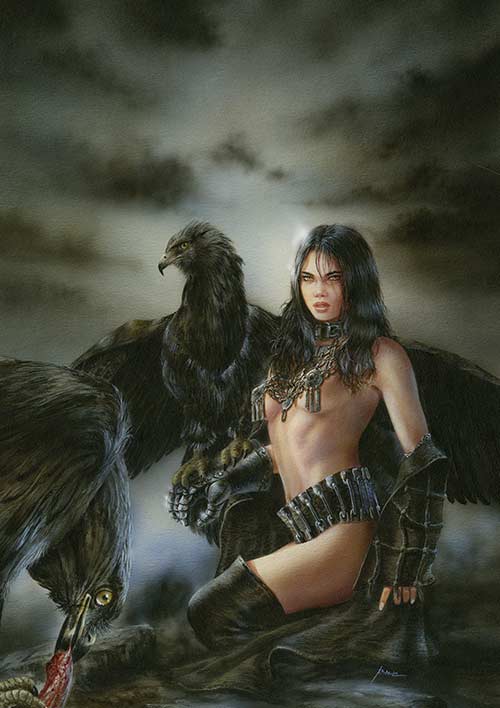 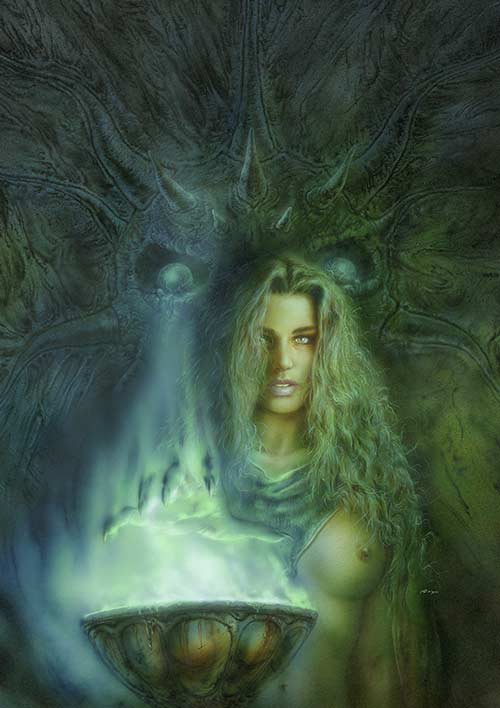 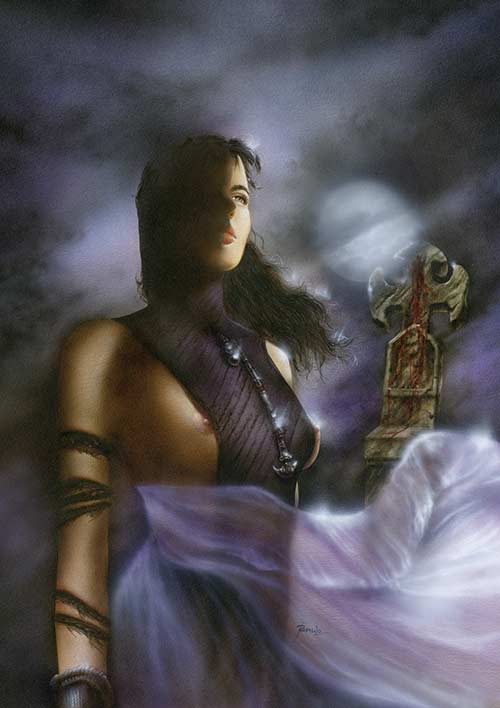 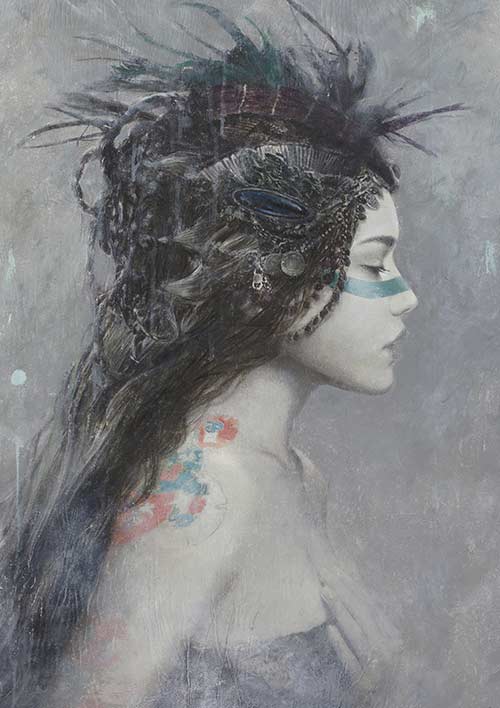 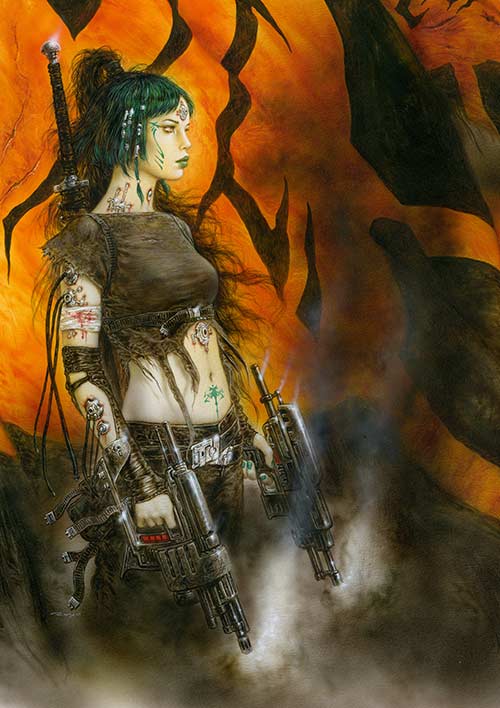 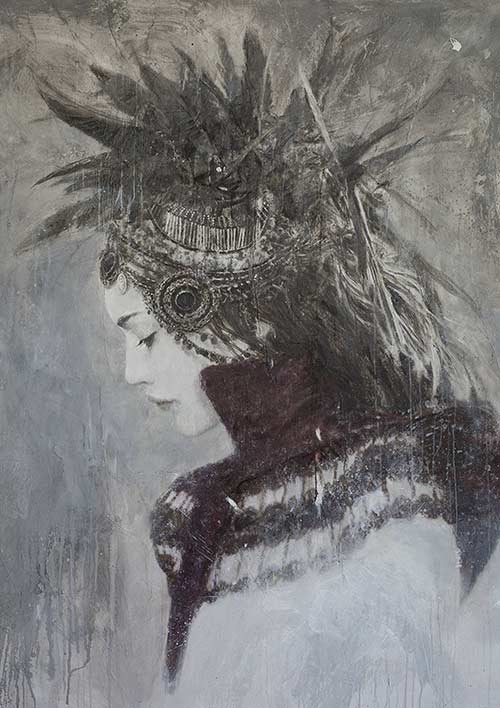 Where does reality end and fantasy begin? Today, you can’t escape the importance of the entertainment industry and the proliferation of fantasy. Thus, we should rephrase the question: where does fantasy end and reality begin? One can even ask if reality exists at all, or if it has disappeared, engulfed by fantasy.

Our lives revolve around screens that no longer serve as mirrors into this world, but rather as Windows to escape into imaginary places. Our point of reference is increasingly based on fairy tales and fantasy, the proof of which is that our most beloved possessions are fabrications of fiction. From computers to DVD to PlayStations and cell phones, we have an arsenal of gadgets at our fingertips. With just the flick of a button, we can enter a world of illusion.

We spend the majoryte of our leisure time escaping to that land of wonder and imagination. When we watch movies, go to the theatre, attend concerts, visit exhibitions, or visit amusement parks, we are participating in low-risk adventures and enjoying sensual delights. Art and artifice, ingenuity and engineering, creativity and marketing come together and meet the most difficult challenge, erasing the barriers between what exists and what is imagined to make our fantasies a definitive reality.

Our ordinary and routine lives would pass us by if the real ran roughshod over the imaginary. We wouldn’t want to buy new things without an image, an ideal, or the sliver of a dream. Sports shoes are wings for our feet, clothing is our unique statement, a soft drink bubbles into a youthful rebellion, a tampón offers women Independence, and a car defines our social position.

Fantasy has infiltrated our most intimate consciousness, affecting the very image we have of ourselves. We want to be beautiful and healthy. We sculpt our bodies with cosmetics, tattoos, implants, and augment ourselves through cosmetic surgery. Even our bodies, the most fixed and fatalistic aspect of ourselves, cannot keep us from dreaming. As a result, we shape our anatomy to echo our own desires or those of another. We have stopped searching for our place in the cosmos in Exchange for the cosmetic. Since fantasy tends to be cosmetic, it’s not a good idea for us to trust it. Fantasy is a subject that can never be completely conquered or understood. Beneath the thin veil of fiction lies reality; dark, urgent, and menacing. It would be better for our prosperity if we sometimes enter into crisis; otherwise our creativity remains paralyzed –by indifference or censorship- causing our house of dreams to collapse. We regress back to the cave, where we live at the mercy of the elements, bare our teeth to survive, and fight for food and territory. Our instincts and reflexes would again govern our actions. We would be so preoccupied with the struggle for survival, there would be no time to dream or imagine. Inhabited by the reality of our surroundings and immersed in our basic needs, the sky would remain beyond our reach.

To avoid this catastrophe so that fantasy is not eclipsed, some of us have managed to colonize new and isolated regions. By keeping alive the creative fire and combating this fatal vision, they rebel againts the constraints of the ordinary, and offer surprises in a sterile desert of routine. Each champion of this talent shares one common mission. Some focus on possible worlds, others suspend belief; some disrobe what is improbable while others clothe it. From the anonymous artist to the most notorious, all contribute to the expansion of fantasy, accentuating its wonders and making the unexpected into reality. 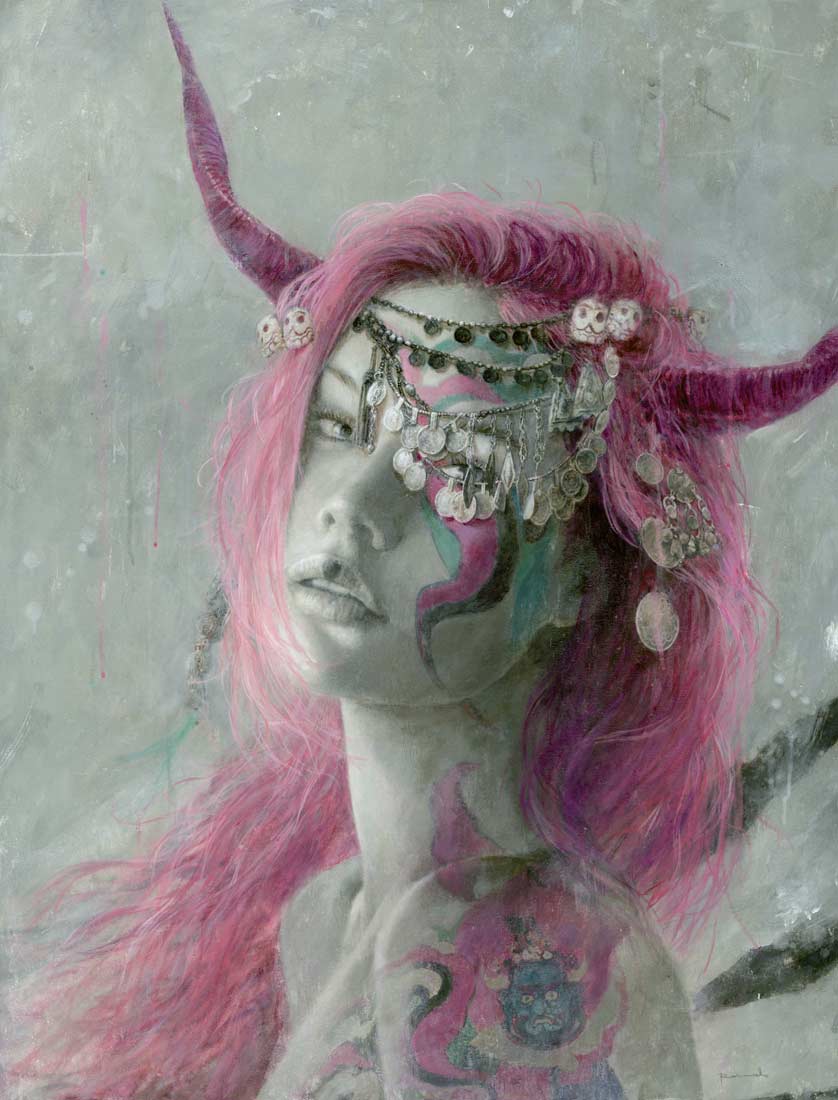 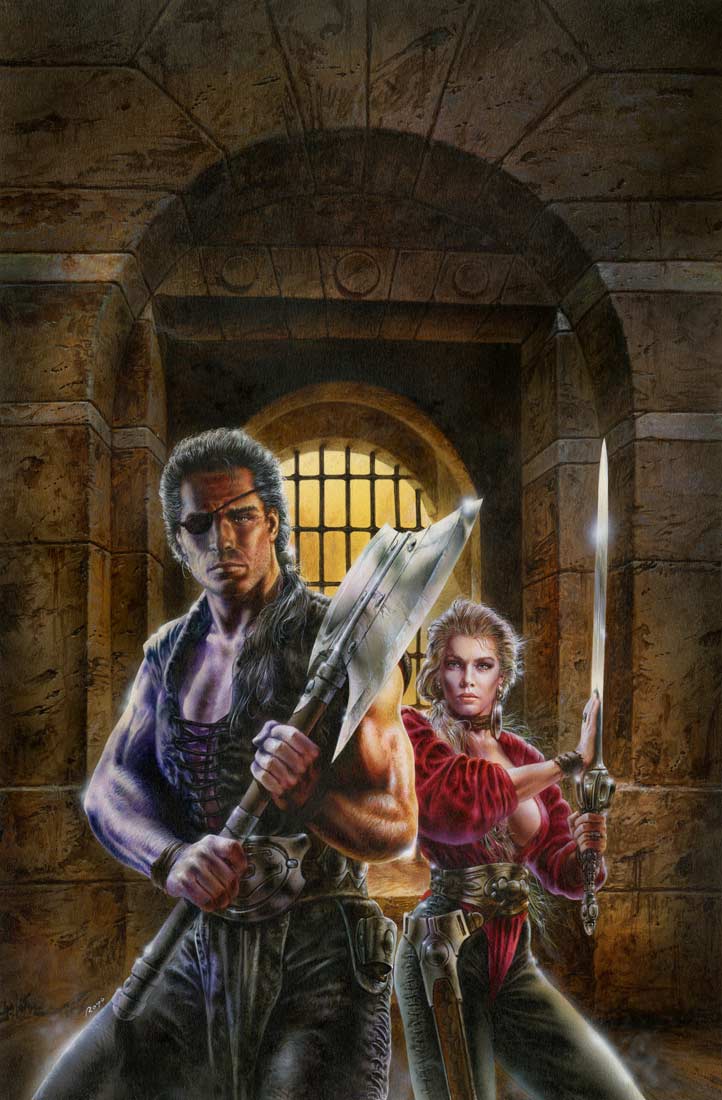 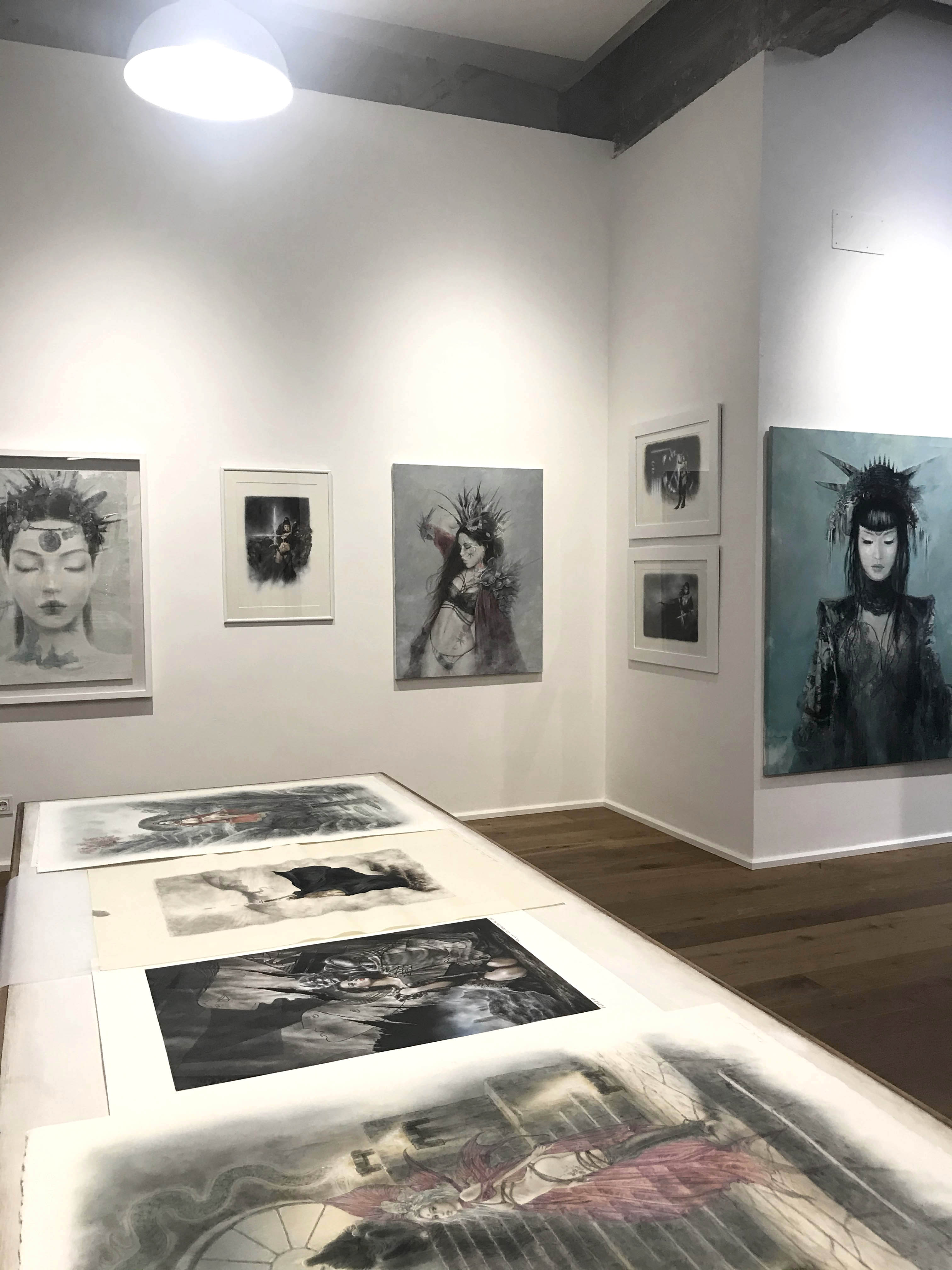 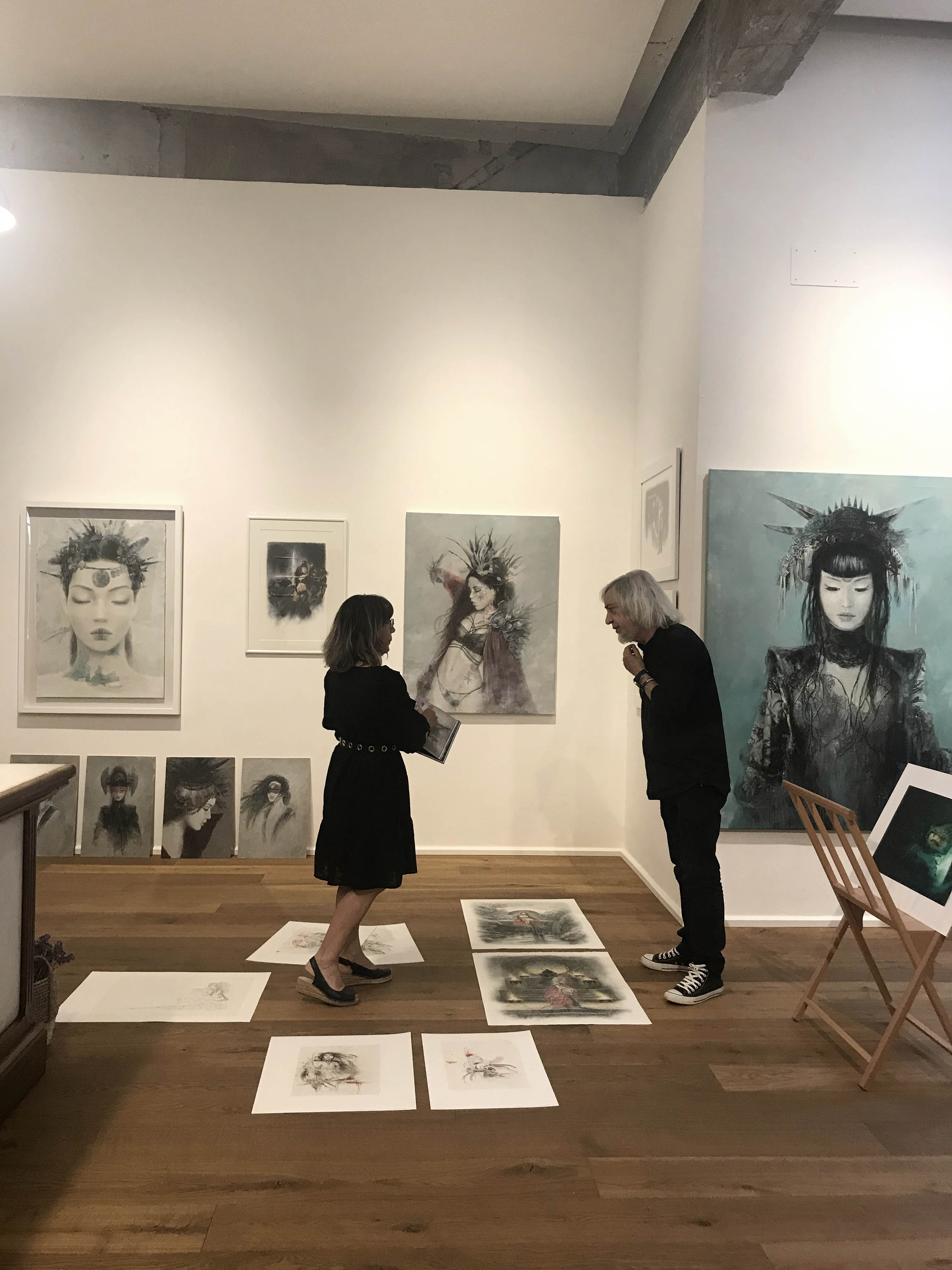 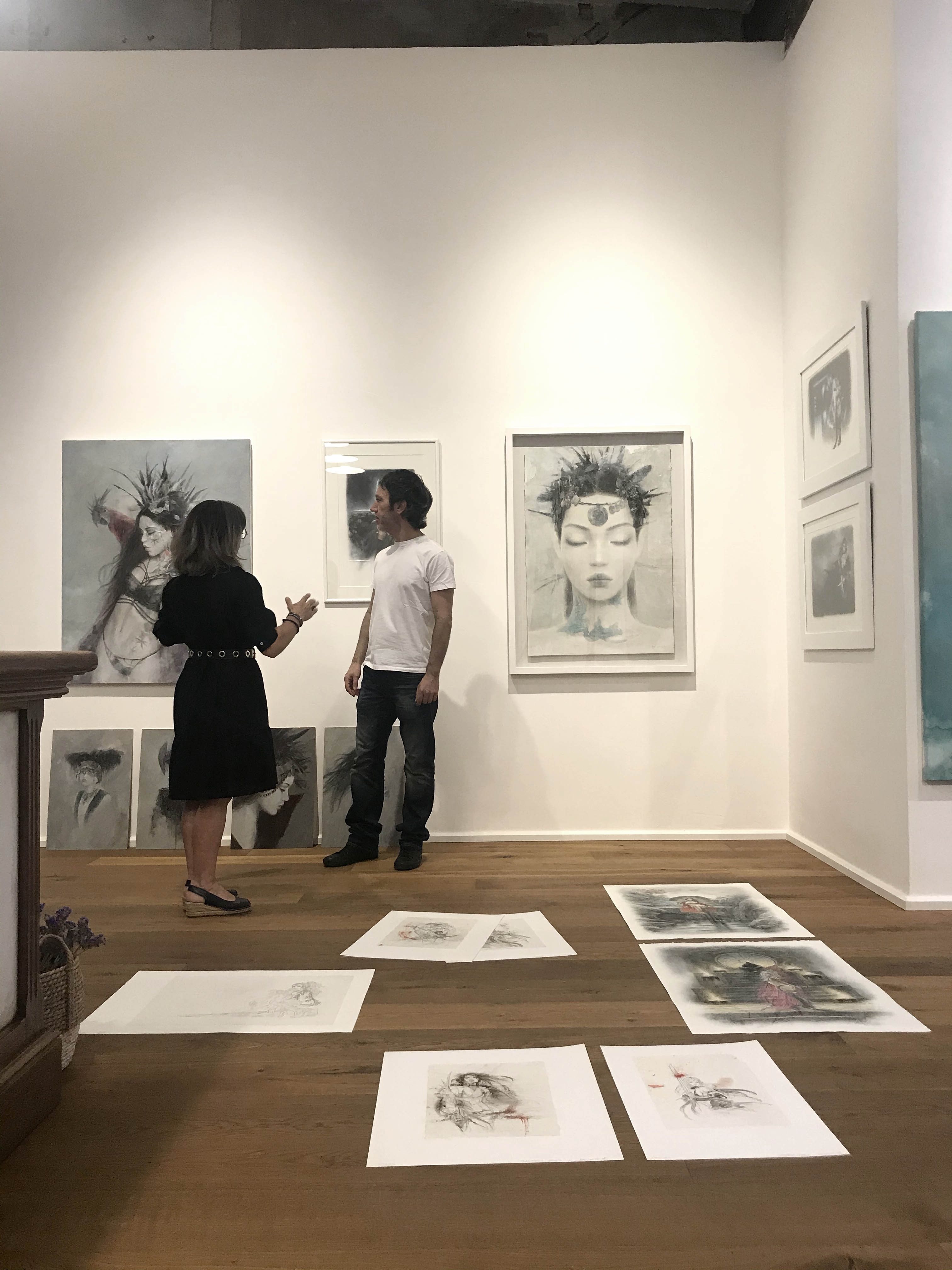 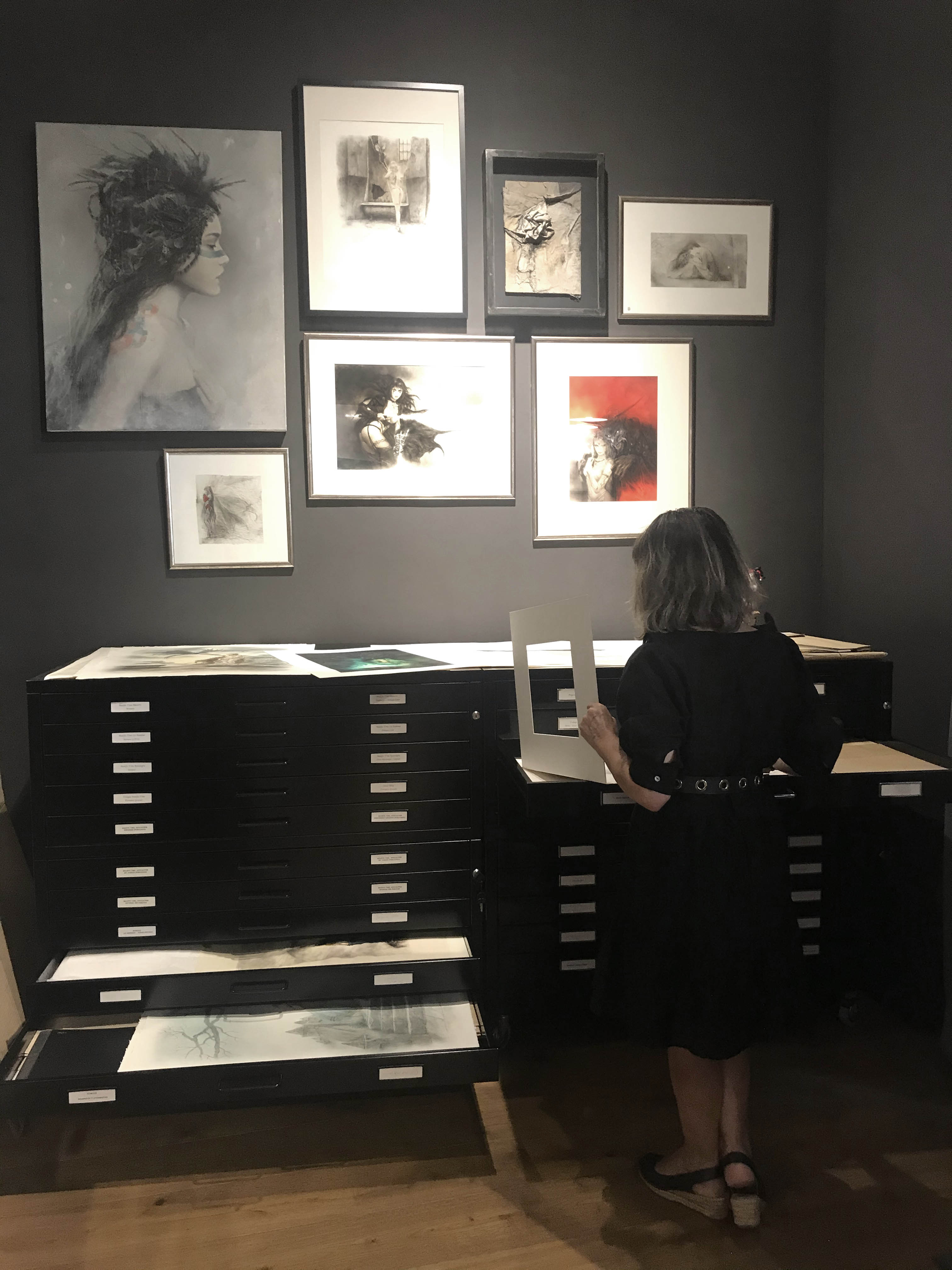