Oil and acrylic on canvas and frame.

Published in pages 2-3 in the book Dead Moon.

"She lifts her sleeves with the music starting; She dances like snow falling. She turns tirelessly, spinning endlessly; Nothing under the sun is as fast as she is; The wheels of the carriages are slower and not even the whirlwind can reach her…"

"With its abundant production, Royo becomes a true mass phenomenon. His books have numerous editions and are poured into French, German, English, Italian, Russian and Portuguese. Magazines such as Stampa, Airbrush-Action or Penthouse dedicate reports to him on his pages. Festivals, art galleries or specialized shops continuously organize exhibitions and tributes. He has made covers of books for great authors and has received awards such as the Silver Award Spectrum and the Inkpot Award Comic Art at Comic-Con International in the United States, or the Fantasy Award The Pilgrim in CTPAHHNK, in Russia. The Millennium Prize of Fumetto Cartoo Mics in Italy, etc".

"The male dragon with a hairy body, whose name is sulfur, fell from the Sun. Night has put things out of balance. Now one can no longer contemplate the two hermetic dragons, the true principle of wisdom that the wise men hid from the eyes of their children. At night, only the female dragon rules, winged, with a rabbit’s snout, damp and volatile". 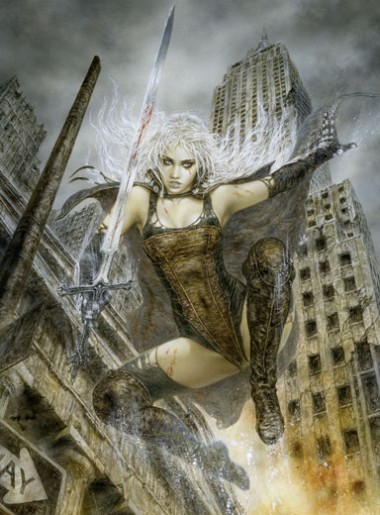