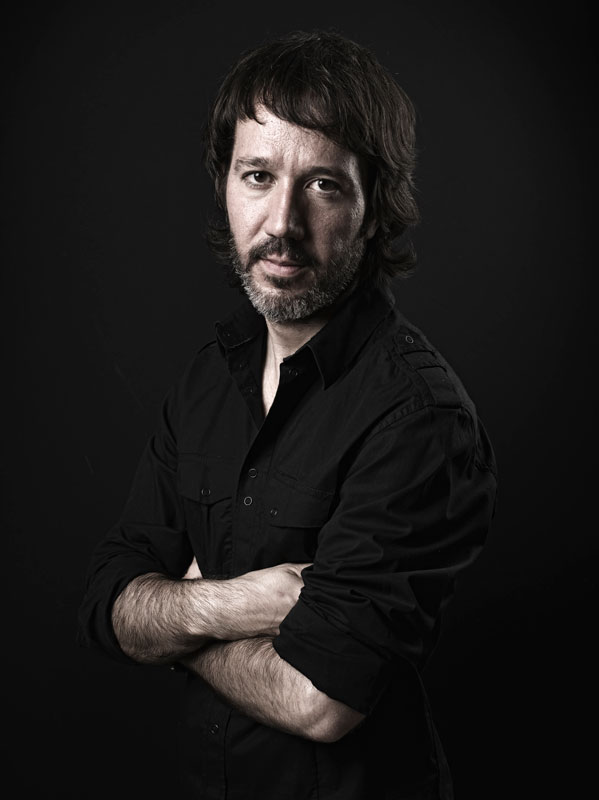 His work has exhibited since the year 2000 and is on show in various different private collections, foundations and museums.

As early as 1995-1999 he started to make illustrations for Norma Editorial, and to publish book covers and comic books internationally for publishers Eura, in Italy, Rad Moskbay, in Russia, and Bastei, in Germany.

In 1997, he formed Group 3 along with Yago Mateo and Raúl Navarro. The group made a name for itself for its performance art and provocative statements, questioning Spanish art circuits at the time.

He had solo exhibitions in the itinerant Meta Project which toured Valencia and A Coruña, in Spain, Verona and Milan, in Italy, Frankfurt in Germany and Tokyo, in Japan. His work was shown at the Pablo Serrano Museum, Huesca Provincial Museum and Teruel Museum. It was also published in several art magazines, including Trebede, Bonart, Exit, Lapiz and Mu magazine.

In 2006, he travelled to Moscow, where he worked in collaboration with Luis Royo on painting the great Medvedev dome. They recorded the whole process in their book, Dome.

He created some of his best-known series, such as Siamese or Metal-Skin, made up of paintings, sculptures, installations and technological media. These could be seen at such prestigious venues as the Museum of Contemporary Art Metelkova, Can Framis Museum, the Martínez Guerricabeitia Foundation’s 10th Biennale at the City of Valencia Museum, Fran Daurel Foundation, the Maeztu Museum, in Estella, and the 4th Moscow Bienniale of Contemporary Art.

In 2009, one of his works, Blackened Times, started with an exhibition in the 25th Alexandria Biennale at the Alexandria National Museum and went on to tour different countries. The Alcort Foundation commissioned a sculpture to add to its collection in the Foundation’s gardens. The same year, he collaborated with Luis Royo on large-format paintings for the book Dead Moon. Of oriental inspiration, it was published worldwide and its pictures inspired a pack of I Ching cards. Later on, he started the Malefic Time universe, once again with Luis Royo. This project combines a set of books sold internationally with paintings and illustrations, novels, sculptures made by the US company, Yamato (USA), and Nocturna (Spain), as well as manga comics and various types of merchandising. These include calendars, published by Pyramid (GB) and by Sellers Publishing (USA), a pack of tarot cards by Fournier, role-playing games and videos. In Spectrum XVIII, The Best in Contemporary Fantastic Art, he published his work entitled The Day Will Come. He exhibited at the Santa Mónica Centre together with an edition of the book On-Off and had shows at galleries such as the Miguel Marcos Gallery in Spain, MDA Gallery in Sweden, FNAC, which toured different cities, and Schwalbe 54 Gallery in Frankfurt. He also exhibited his work at various art shows, like Arco Madrid, where he started to exhibit regularly in 2012.

Between 2012 and 2016 the three books in the Malefic Time trilogy (Apocalypse, 110 Katanas and Akelarre) were published worldwide in over eight different languages. They were published by Cross Cult, in Germany, by Bragelonne, in France, by Norma Editorial (Spanish and English editions), by Rizzoli Lizard, in Italy, and by Azbuka, in Russia.

In 2014, he started painting the series, Goddesses of Nibiru. Recent exhibition venues include Kavachnina Contemporary Gallery in Miami, Miguel Marcos Gallery in Barcelona, and Champaka Gallery in Brussels. His works have been auctioned at prestigious auctioneers like Christie’s Paris, Ketterer Kunst, in Munich, Galartis in Switzerland and at the Womanity Foundation’s auction, with the famous Simon de Pury as auctioneer and the participation of such prestigious galleries as Gagosian, Miguel Marcos and Aquavella. He has also exhibited at shows like Art Miami, Gige Beijing China, Istanbul’s Art International and Arco Madrid.