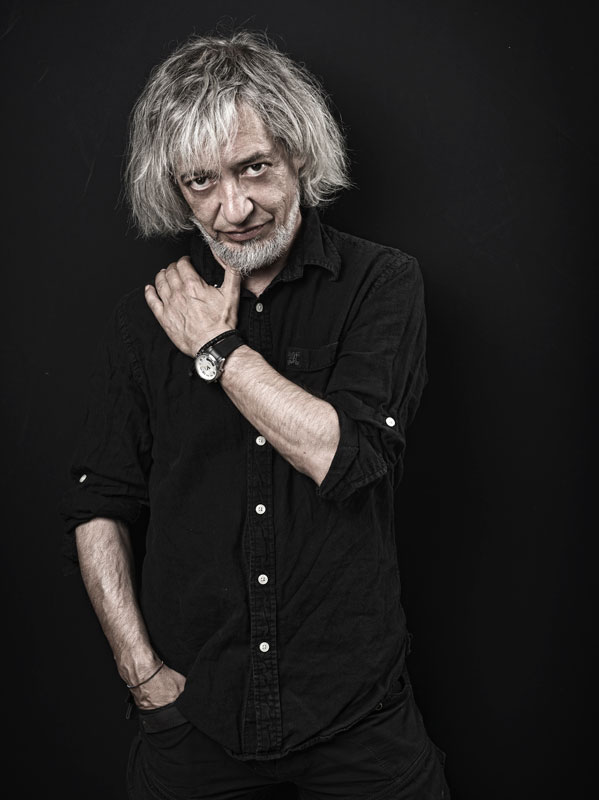 Luis Royo was born in 1954 in Olalla, Teruel in Spain.

In 1972, he started to exhibit his paintings and in 1980 he first published his comics in magazines like 1984, Rambla, El Víbora and Heavy Metal.

In 1983, he began to focus on illustration, the area in which he was to be most successful, and went on to publish his work internationally. He created works for countries such as the US, Great Britain and Sweden, as well as book covers for such prestigious publishers as Tor Book, Berkley Books, Avon, Warner Books, and Batman Books. Magazines often used Luis Royo’s artwork to illustrate their covers, including US magazines Heavy Metal and National Lampoon and European magazines Cimoc, Cómic Art, Ere Comprime and Total Metal. This was not his only work during these years, since he also began designing video cases and such mythical video games as Game Over, Turbo Girl and Navy Moves.

From 1990, once he had established a firm hold on the international illustration market, he began to increased his production of original works. Most of this work was published in different media, as well as in the artist’s own books. In 1992, he published his first personal book, Women; the US magazine, Penthouse, ran an article on him, and later featured his illustrations; and Heavy Metal featured him in The Art of Heavy Metal ab. Comic Images published his collections of trading cards From Fantasy to Reality and The Best of Royo. In the next few years, this was followed by the books Malefic and Secrets, both launched internationally. New publishers became interested in Luis Royo’s work: Ballantine, Nal, Daw, Doubleday, Harper Paperbacks, Zebra, Fasa Corporation, Pocket Books for the Star Trek series, Penthouse Comix and the Fleer Ultra X-men cards, for Marvel Comics. From then on, Luis Royo’s work appeared in a multitude of formats and in many different countries (including countries in Eastern Europe): calendars, posters, t-shirts, CD cases, mouse mats, collectable cards etc.

In 1996, a painting of his was published exceptionally on the cover of the US edition of Penthouse (instead of the traditional photo of a Penthouse Girl), and in Germany, together with an article on his work. The same year, numerous articles on his work appeared in publications like La Stampa in Italy, Airbrush Action in the US, and Penthouse Comix. His third book, Secrets, was published in 1996. Heavy Metal’s interest in Luis Royo was to be reflected during these years in a series of front pages and calendars, as well as at its gallery, which featured Royo, the commission for the front page of the magazine’s 20th anniversary issue and a series of illustrations for Kevin Eastman’s character, F.A.K.K. (Julie Strain). The same year, Comic Images published the trading card sets: Royo Secret Desires (the artist’s fourth individual collection) and Artist’s Choice. New editions of Women and Malefic were brought out both in the US and in Europe, just as the publication of new editions would be frequent for his later books. A year later, his next book of illustrations, Third Millennium, appeared and he also presented his pack of tarot cards, The Black Tarot, his fifth collection of trading cards under the name Third Millennium and the portfolio, Third Millennium Memory.

Royo presented his album Dreams in 1999, a compilation of his genre work. It was followed by a new book, Evolution and also by the portfolio, Tattoos. The artist took a new direction at the end of the year with a daring creation, the publication of the first erotic volume, Prohibited Book. As this work was conceived as a trilogy, it was followed by Prohibited Book II and Prohibited Book III and a fourth book, Prohibited Sketchbook, which closed the collection with the project’s preliminary sketches and pencil drawings. Fournier published a pack of poker cards. In 2002, the artist showed his preliminary work to illustration with the publication of his sketches and drawings in the trilogy of books, Conceptions. His book Visions, was published in 2003, as well as the portfolios Chains and Prohibited Sex.

Fantastic Art, published in May 2004, brought together the most complete collection of the artist’s illustrations. This luxury, limited edition

was published in two high-quality formats and was a clear indication of the importance of Luis Royo’s work. It was followed by The Labyrinth Tarot, a work in two formats: a pack of cards and an illustrated book. Then came his book Subversive Beauty, published in 2005, and the collection Wild Sketches, three books of manga-format sketches. During these years, as he had become a cult figure, several heavy metal rock bands from different countries like Germany, Italy and Spain, used his pictures for CD and record sleeves. His work also extended to the design of fantasy pool cues, numerous puzzles, Zippo lighters, flags, posters, calendars and many other internationally-distributed merchandising products.

In 2006, in conjunction with Romulo Royo, Luis Royo painted an enormous fresco in Moscow (Russia) – the huge painting of a dome, the author’s largest work to date. This work led to the publication of the book, Dome, which records the process and paintings. He went on to publish the book Dark Labyrinth, and the US-Japanese company Yamato produced his figure Medusa’s Gaze for sale, to be followed by other new figures in the years to come. In 2009, he published the illustrated book, Dead Moon, in collaboration with Rómulo Royo, to be followed by Dead Moon Epilogue.

From 2011 onwards, Luis Royo and Romulo Royo published Apocalypse, the first volume of Malefic Time. It was followed by 110 Katanas and Akelarre, completing the trilogy of this multimedia project which, in addition to its three illustrated books, brings together novel, figures, manga, music, role games, tarot and so on. He also published the illustrated book The Ice Dragon, written by George R.R. Martin (known for his Game of Thrones saga), which became a New York Times bestseller. In collaboration with the companies Yamato USA and DC, the sculptures of the classic super heroes were made following a new design.

Throughout his long career, Luis Royo has exhibited his work at art shows and galleries in France, Spain, Belgium, Germany, Russia and the USA. He has also been awarded numerous prizes, including the Spectrum Silver Award (The Best in Contemporary, Fantastic Art) and The Inkpot Comic Art Award (Comi-Con International San Diego) in the USA, or the Peregrino Fantasy Prize in СТРАННИК, in Russia, and the Fumetto Cartoomics Millenium award in Italy.