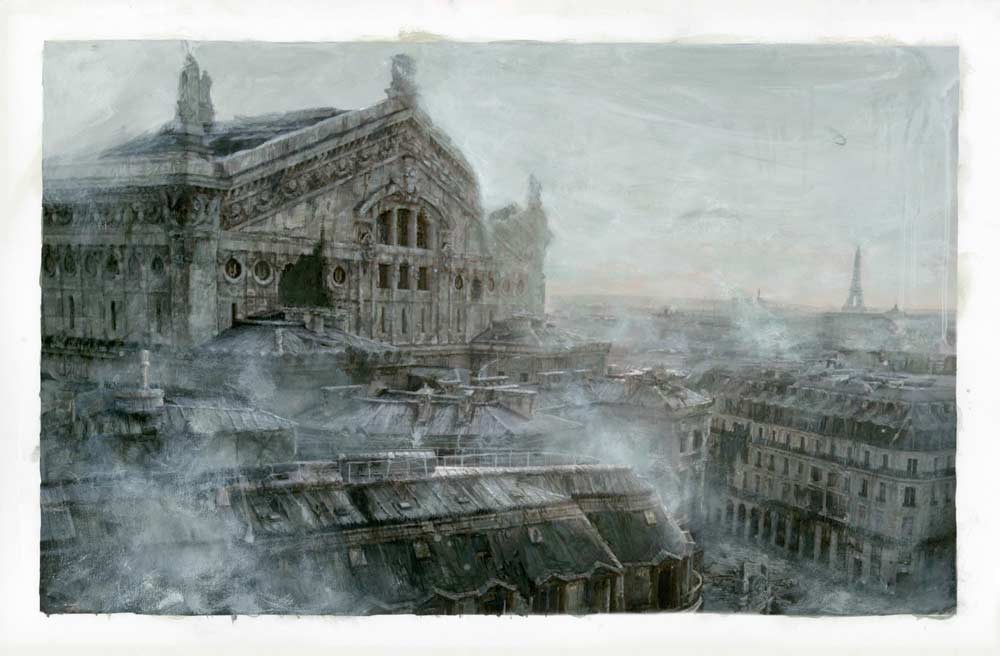 Signed at the bottom right side of the piece.

Published on the inside of the author's book Malefic Time, Akelarre , page 2-3.Edited in several languages and distribuited internationally.

Romulo with this piece wants to transport us to a decadent and poetic Paris of the year 2038. Wrapped in a gothic atmosphere where the effect of fog is the protagonist. The panoramic view from those roofs, impress by the fantasized veracity and its dramatic chromaticism. A meticulous work to situate us in scene of the action that is to come.

"He approaches his work from the premise of a figurative language marked by a primitive composition , at the same time treated with force in his brushstrokes and a delicacy in colors and veils thta enhance the power exerted by his figures. Some of his influences are found in filmmakers like Ridley Scott or George Lucs with films like Alien, Blade Runner or the first Star Wars trilogy and authors like Jodorowsky.

Works in the Malefic time universe. The multimedia project brings together several books with paintings, international circulation, novels, manga, sculptures made by the company Yamato ( USA ), and merchandising as calendars edited by Pyramid ( UK ) or Sellers Publishing ( USA )."

The new day brought an unusual movement of people through the streets of central Paris.Among groups dressed in many different ways with the only common denominator of a return to the past in their clothes gather in assemblies where the ringleaders discuss.